What Are Some of Nicaragua’s Popular Food? 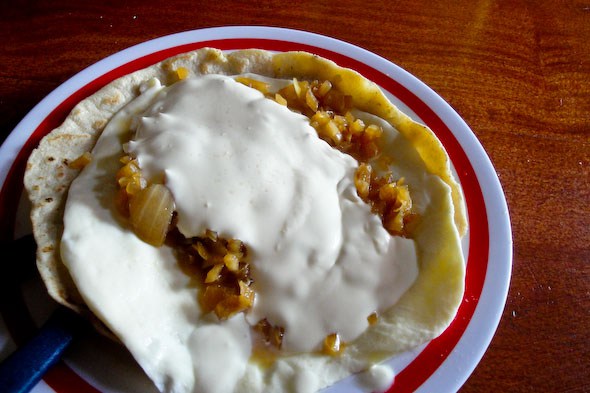 TODAY NICARAGUA – Nicaragua is an interesting place, with a tumultuous history and a relatively peaceful present. and even if many things can be better, many people live happy lives there.

If there is one thing that unifies all Nicaraguans is the love for their tradition and their culture. Nicaraguans are proud of what they have. And one of the things they have is their local food.

The Nicaraguan cuisine includes a mixture of the indigenous Miskito people, Spanish cuisine and Creole cuisine. Despite the blending and incorporation of pre-Columbian and Spanish influenced cuisine, traditional cuisine differs on the Pacific and the Caribbean coast.

Many of the local dishes are based on corn, and some of them are cooked on banana leaves for a unique taste. 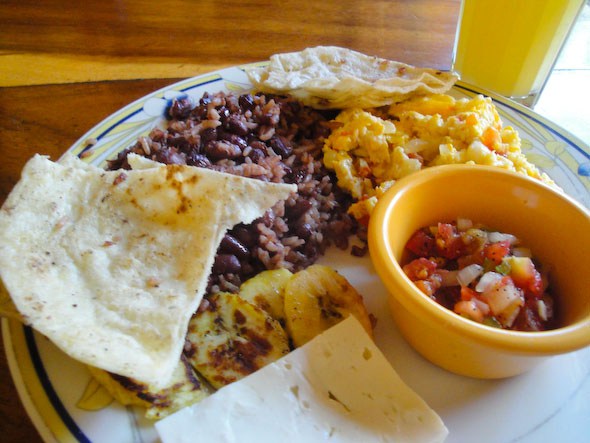 A mixture of rice and beans (appearing above in breakfast), most Nicaraguans eat this almost daily and it is considered a national symbol. It’s delicious but I ate this so often that after a few weeks I asked if I could have my rice and beans “separado”  for some variety. 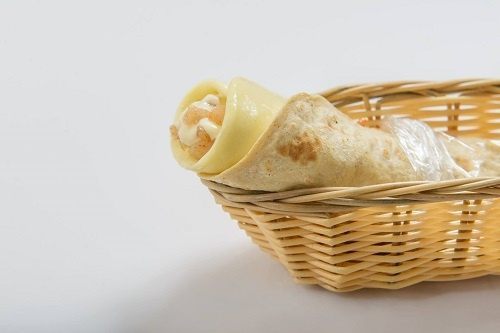 A medium sized tortilla topped with molten cheese, pickled sliced onions, sour cream, rolled into the shape of a burrito. Very convenient for eating on the run. It has become a staple of the Nicaraguan cuisine (although it may have its roots elsewhere)

Originally from León, it’s a simple dish but so tasty that restaurants are dedicated to selling only quesillos. They say that the best are found on the highway between Managua and Leon, but I had them and did not notice a difference from those sold on the street in Leon. 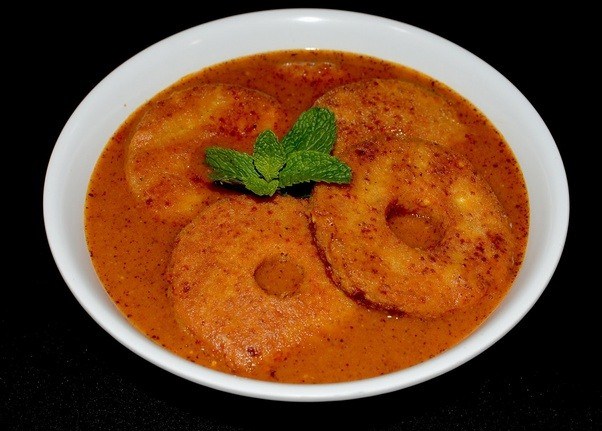 It’s a tomato – chicken broth topped with crispy fried cheese-balls. The cheese taste comes from the fact that the cheese-balls disintegrate into the broth at the moment you put them in. Again, there may be similar dishes to this one in Latin America. 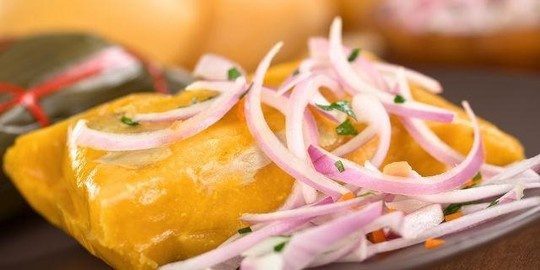 Nactamales is the local take on the traditional Latin America Tamale. It’s big. It’s tasty, it’s high in calories. It’s made of corn flour, and filled up with as many as 20 ingredients, which may include: pork, chicken, peas, carrots, onions, peppermint, sour orange, peppers, and many others. This is one of the meals that is cooked in banana leaves. An average Nacatamal may have 1000 calories. It is very popular. 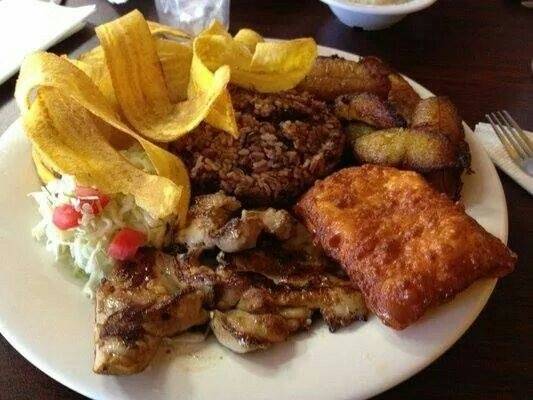 This is the most common street food in the country for night time. If you want to eat local at any town, just ask anyone: “Where can I have the best Fritanga”, and they will guide you to their favorite food spot. Fritanga is a mixture of fried and tasty pieces of beef, chicken, pork, plantains, cheese, all topped with chopped cabbage and tomatoes. Will fill you up quite well. 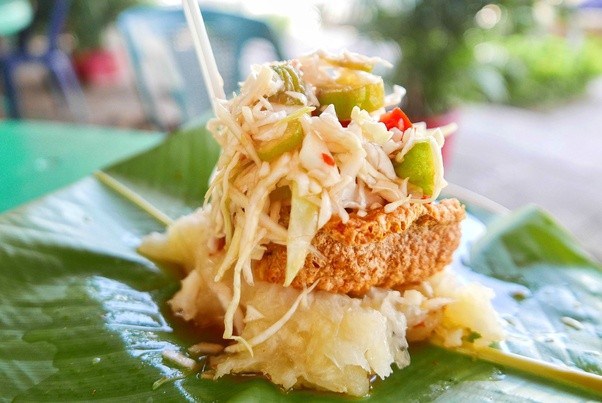 Pork cracklings with tenderly cooked cassava, topped with chopped cabbage and tomatoes. This is one food that can be traced to its origins. Nicaragua is a country where Baseball is the most popular sport.

A lady entrepreneur was looking for a way of selling food at a baseball stadium, in such a way people could eat it without using forks, and could easily dispose of any trash. She came up with the ingredients, and the name has to do with a medicine with the same name, which was used to increase the vigor of people.

The food became a staple of Granada, the town where it was developed, but it is eaten around the country and beyond. It is usually served on banana leaves. 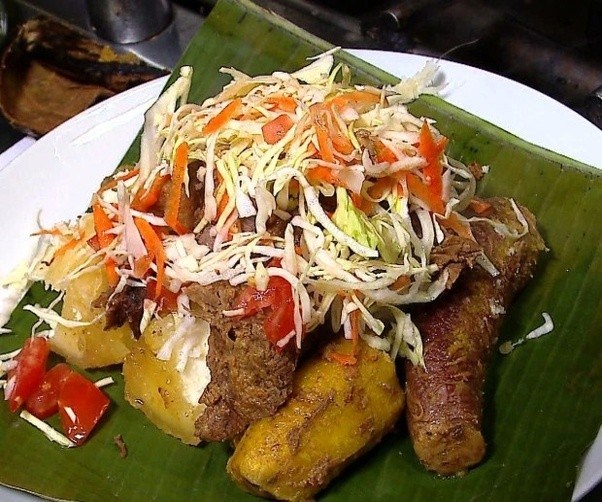 This one is more elaborate, and it takes dried beef and some vegetables: cassava, plantain, tomatoes, onions, all topped, yes, with the same chopped cabbage and tomatoes as in the previous plates. This food is popular for lunch, and also served on the people’s plates. Very tasty, very hearty.

These are just some examples of the food you get in Nicaragua, across the whole country. But there are many local dishes in every city that can be taken advantage of.

Nicaraguans are proud of their country, their culture and their food. Just ask.

What do Nicaraguans eat daily?

In rural Nicaragua, there isn’t a whole lot of variation between days or between meals.There is also a lot of snacking. Pick mangos and mamon off of trees and eat them when they want is not uncommon.

In the cities, there is a lot more variation of what you can eat, similar to anywhere else.

For more on Nicaraguan cuiside visit this Wikipedia link.

- Advertisement -
Paying the bills
Previous articleNo Rational Solution On Sight For Venezuela Violence
Next articleParaguay’s population is booming, but where are all the jobs?

Many expats become enamored with Costa Rican food and want to...
Read more

How expats can maintain a healthy diet in Costa Rica

Home to beautiful beaches, low-cost and high-quality living, and wildlife in...
Read more

QCOSTARICA -  As Costa Rica goes through the fourth...
Health