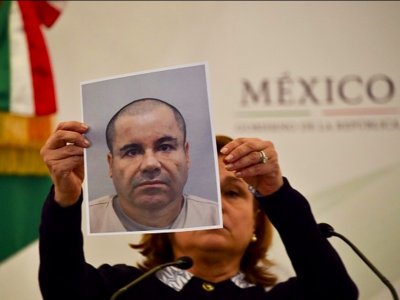 Marines initially approached the ranch by helicopter but were turned back by heavy gunfire. Marines later secured the area on foot, but not before El Chapo and his security detail fled on ATVs, according to reports.

Security forces reportedly found cell phones, medication, and two-way radios at the site. In a statement, Mexico‘s national security cabinet described Chapo as making a “hasty escape” which “caused him injury in one leg and on the face.”

“It is important to specify that these injuries were not the result of a direct confrontation,” the statement added.

After his escape, security forces believed they had El Chapo surrounded in a two-mile radius in the Sierra Madre mountains. However, after a fruitless week and half, El Chapo‘s immediate recapture looks doubtful. An elite force plans to remain in the Sierra Madre mountains, while authorities continue to focus their hunt in this area, Milenio reported.

El Chapo has been an embarrassment to President Enrique Peña Nieto since he tunneled out of Mexican prison earlier this year. News of Chapo’s narrow escape follows an earlier release of a video, apparently showing authorities failing to respond to loud tunneling sounds. Although the video’s authenticity is disputed, it has continued to feed mistrust in the government and invited more accusations that Nieto’s administration suppressed information about the escape.

So far authorities have issued warrants for 23 former officials, guards, and police, and have placed 10 civilians on house arrest for alleged participation in the escape, according to El Daily Post.

It’s possible the future will see more narrow escapes from the notoriously elusive Chapo. This one — the first in what may be several — provides an important opportunity to reflect on what tactics work best when pursuing cartel leaders.

Mexico’s approach could colloquially be described as “go in with guns blazing,” in part a reflection of its heavily militarized strategy against organized crime. Given how well-armed and prepared Chapo’s forces seem to be, the “guns blazing” approach may seem necessary, but it has the drawback of potentially inflicting collateral damage against surrounding populations. The AFP reported that after the military’s attack, many local communities reported having their cars destroyed and their homes riddled with bullets.

This is precisely the population that Mexico‘s government arguably needs to win over, in order to continue accessing reliable intelligence about Chapo’s whereabouts. Alienating locals will only continue to deny authorities an important source of informants.

If Mexico continues this heavy-handed approach, it could potentially result in more severe abuses against civilians. This might prompt the US — which played a key role in contributing intelligence needed to locate El Chapo, as confirmed by the Mexican government — to place certain conditions on its ongoing cooperation.

Other countries like Peru have had some success in pursuing high-value targets by valuing cunning and use of intelligence over brute force. Yet given previous incidents like the Jalisco Cartel’s downing of a helicopter earlier this year, for now Mexico‘s security forces may feel that the softer approach of cultivating informants may be useless in the face of the Sinaloa Cartel‘s firepower.