When can governments revoke citizenship?

It is a controversial practice, particularly if it may leave a person stateless

The Economist – “IT’S KIND of heartbreaking to read,” said Shamima Begum in response to a letter from the Home Office telling her that her British citizenship had been revoked. 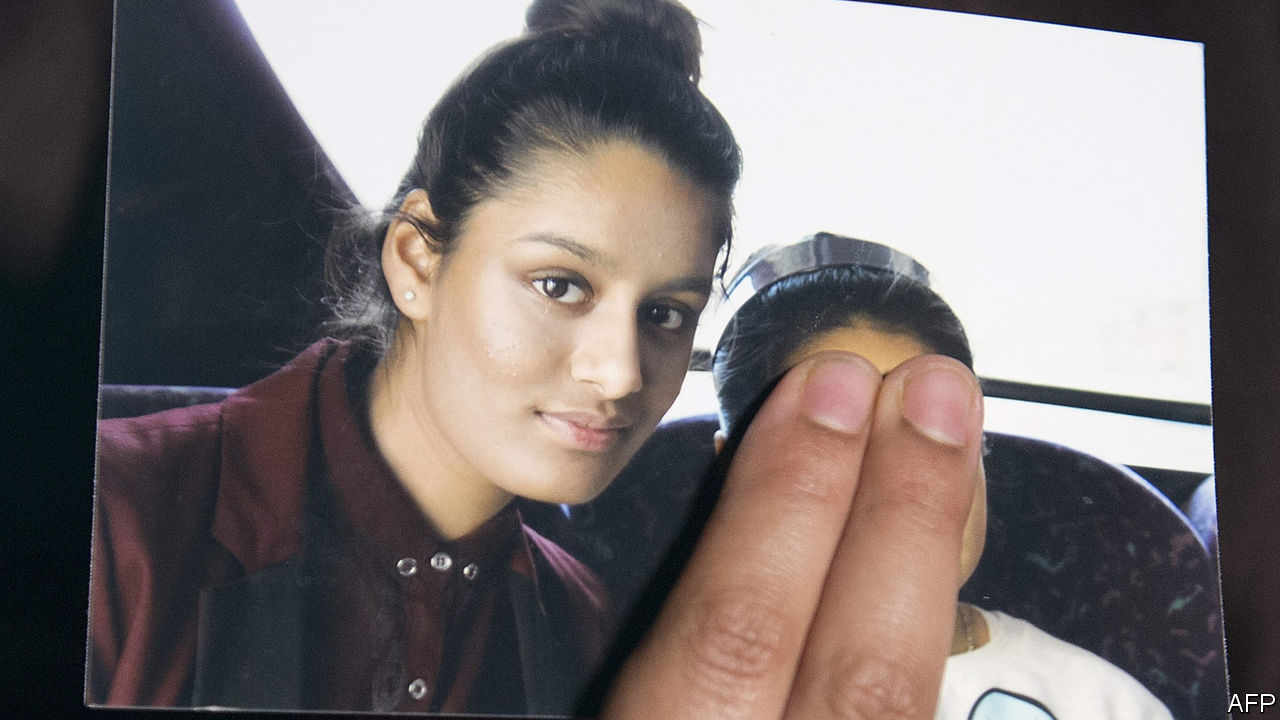 Ms Begum (pictured), who was born in Britain, left the country four years ago, aged 15, to join Islamic State (IS) in Syria. Located by a journalist from the Times in a refugee camp last month, Ms Begum expressed a desire to return to Britain. That request has been denied. The case is proving controversial, with suggestions from some quarters that Britain has violated international law by leaving Ms Begum stateless.

When can governments revoke citizenship?

The practice is not new. In America the Expatriation Act of 1907 removed a woman’s citizenship if she married a foreign man, and the country used similar tools throughout the 20th century against Nazi collaborators, suspected spies and other “un-American” citizens.

During the second world war the Vichy regime denaturalized 15,000 French citizens, many of them Jews. In 1967 America’s Supreme Court ruled that citizens could only be denaturalized if their citizenship was fraudulently gained—by concealing an involvement in past crimes, for example.

In recent years the withdrawal of citizenship has been used by some countries in the fight against terrorism, as a way to prevent jihadists from returning home. Many countries reserve the right to remove citizenship if a person is in some way treasonous: Denmark and Australia have done so with IS fighters.

Revoking someone’s citizenship is hugely controversial. The Universal Declaration of Human Rights enshrines having a nationality as a right, forbidding countries to arbitrarily deprive someone of it. A UN convention from 1961 goes further, banning the withdrawal of citizenship based on race, religion or politics, and also banning it in cases where doing so would leave a person stateless.

The convention does, though, give exemptions to states whose national laws, at the time of signing, gave them the right to make someone stateless. Britain has such an exemption, though is not known to have used it since 1973.

Many others, including America, have not ratified the convention at all, and can ignore the rules. Kuwait and Bahrain, two other non-signatories, are known to have stripped political dissidents of citizenship.

Attempts to avoid making someone stateless can create other problems. Under recent legislation, British-born citizens can only be stripped of British citizenship if they have another nationality. Some argue this creates a two-tiered policy, under which the citizenship of Britons with another citizenship (or potentially another citizenship) is less assured.

America’s recently established “denaturalization task force” has unnerved many. It aggressively pursues immigrants who lied on their citizenship-application forms, and those forms are not the easiest to navigate.

Questions have also been raised about whether the stripping of a person’s citizenship is a useful tool for fighting terrorism. It may inadvertently hamper global security by leaving jihadists abroad, rather than imprisoning—or at least controlling—them domestically.

And forcing other countries to deal with exiles is damaging to international relations (Bangladesh and Britain are currently in a dispute about which citizenship Ms Begum can claim).

Despite these concerns, Britain has dramatically increased its use of the powers. Between 2006 and 2016, 50 people were stripped of British citizenship on the grounds it would be “conducive to the public good”; in 2017 alone, 104 were.

The questions raised by Ms Begum’s case will be asked again.

QCOSTARICA -  If you, or your spouse, receive an income of...
Read more

QCOSTARICA - If you haven't gotten over the whopping increase in fuel prices that went into effect this Wednesday, ready for another, the fifth...
HQ

Fake massage parlor was used for sexual services in Guadalupe

HQ - A 42-year-old woman, a Venezuelan national identified by her last name Padilla Mujica, was detained by agents of the Organismo de Investigación...
Farandula

Solitaire is simply the game you need to try in a lifetime. Some people say it’s for narcissists; others say that it’s for depressed...
Brazil

Q24N - Prostitutes in the Brazilian city of Belo Horizonte have gone on a week-long strike, urging the government to give them prioritized COVID...
Living in Costa Rica

RICO's TICO BULL - Today, Monday, April 5, Costa Rica opened its land borders with Nicaragua and Panama to tourists, in what both the...
Coronavirus

QCOSTARICA - A 28-year-old man from Alajuela and a 32-year-old woman from Heredia are the first two cases of people infected with the SARS-CoV-2...
Trends

TRENDS - Latin America is a tropical hotspot for not only the most beautiful beaches, but also some of the boldest swimwear for men....