Why Is Latin America So Corrupt?

The annual release of the global Corruption Perceptions Index is rarely good news for Latin America. Except for a handful of standout nations, the region consistently performs poorly, with all but six mainland Latin American countries appearing in the bottom half of the table this year. But what do the 18 years of the index tell us about the state of corruption in Latin America? 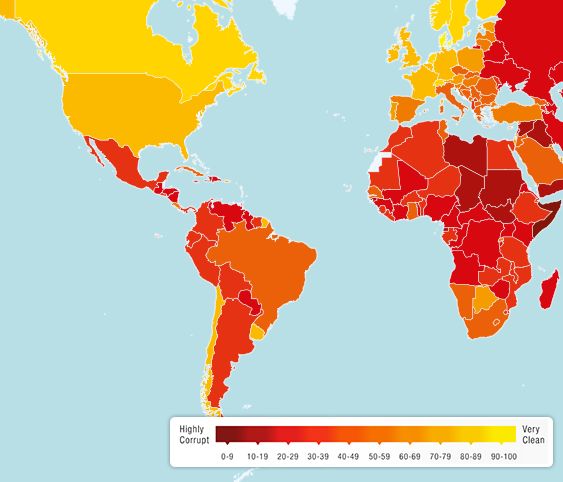 Published every year since 1995 by NGO Transparency International, the Corruption Perceptions Index (CPI) compiles results from independent surveys by NGOs to estimate how corrupt the public sectors of different countries are. Over the years the CPI has grown in scope, originally ranking 41 nations but in 2013 including 177.

In a 2012 independent assessment of Transparency International’s methodology (pdf download), the European Commission concluded the CPI was “appealing for reasons of transparency and replicability, it is also conceptually and statistically coherent and with a balanced structure,” as well as saying, “the CPI can efficiently differentiate the level of corruption between countries, unlike some sources where a large number of countries is assessed at the same level of corruption.”

While the concept of assessing perceptions comes with its own pitfalls, according to Transparency International’s Regional Coordinator for the Americas Max Heywood it’s the best method available, given the difficulty of assessing corruption itself.

“Methodologically it’s practically impossible to measure actual cases of corruption,” explains Heywood. “You could do things that look at judicial cases… but then what it possibly could just mean is that you have an effective justice system that’s being very active against corruption.”

According to Heywood, the accuracy of the CPI is outlined by the fact many of the trends match patterns seen in other studies, such as those of the Global Corruption Barometer, a study of citizen’s corruption perceptions produced every two years by Transparency International.

Since 1995, Latin America’s inclusion has risen from six nations to all mainland countries except Belize, as well as the most populated and some smaller Caribbean nations. For the purpose of this regional overview, InSight Crime compiled the historical results of all countries in North, South and Central America, as well as all Caribbean nations and territories with a population exceeding one million (see table). For comparison, the rating system used up to 2011 — with a maximum score of ten — has been converted to the current system, with a maximum score of 100.

Overall the table highlights remarkable continuity throughout the region, which — given the low scores — essentially marks a failure to effectively address corruption over almost two decades.

One of the most notable changes is the rise of Uruguay from the middle of the region’s pack when it first appeared in 1997, to Latin America’s best performer, now on par with the United States. The country’s rating leapt up in 2006 — the year after the left-leaning Frente Amplio coalition swept to power — and has continued to rise almost every year since. The Frente Amplio is generally seen as a transparent political machine, gaining the trust of the people to the point that it has recently managed to push through policies and legislation the majority of citizens are opposed to, yet still remain the front runner for elections next year.

A similar, albeit less profound, shift is notable in Ecuador, which has registered year-on-year improvements since 2008 — the year after incumbent President Rafael Correa came to power. While its current score of 35 still points to endemic corruption, Correa brought an end to a period of flux which saw seven presidents lead the country in just ten years.

When analyzing what sets apart the Latin American countries that have consistently sat atop the regional chart — namely Uruguay, Chile and Costa Rica — a notable pattern is the relative absence of organized crime compared to elsewhere in the region. While there have been signs that dynamic is changing, particularly in Chile and Costa Rica, none of them have traditionally been drug producing or exporting nations and only Costa Rica — almost always the lowest of the three — has historically witnessed significant drug transiting, as product passes through from South America on its way towards the United States.

The relationship between organized crime and corruption is impossible to overstate and goes some way towards explaining why Latin America’s corruption ratings have largely remained static. Without corrupt officials facilitating its activities, organized crime would not be able to survive.

Due to its geographical location, Central America, home to some of the CPI’s worst performers in the region, is a hub of drug trafficking and beset by criminal groups. In the face of weak economies and state institutions, drug trafficking organizations have historically acted with impunity to transport contraband through the isthmus, buying the loyalty of underpaid officials along the way.

Even access to significant funding seemingly offers no remedy to corruption, as demonstrated by the cases of Mexico and Colombia — mainland Latin America’s major beneficiaries of US aid. Despite receiving billions of dollars in assistance since the turn of the century, neither has seen a significant change in its corruption rating since the CPI began. With much of that aid directed at combatting the groups responsible for the drug flow, the failure to see a marked change in corruption is perhaps an illustration of what many commentators have begun to call the “failure of the ‘war on drugs.'”

However, while organized crime undoubtedly plays a significant part, it would be naïve to ignore the role of history in the region’s corruption landscape. Built on political systems skewed towards the needs of powerful oligarchies, which in many places continue to wield significant economic and political power today, corruption has permeated the region far longer than the drugs trade and would likely persist even in the face of organized crime’s demise.