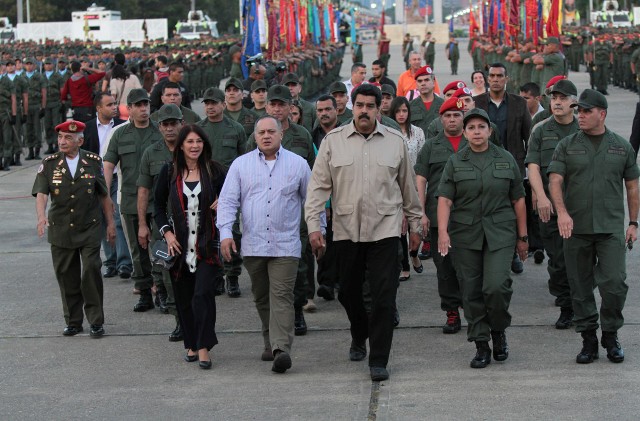 TODAY VENEZUELA via Expat-Chronicles  – In September I published “What is Venezuela’s Exit Strategy,” a rambling piece on the limits of democracy in Latin American history, especially in the wake of economic crises.

And my main point was that, whether Venezuela implements market reforms or not, the political future is likely to be led by a dictator.

I felt a little uneasy three months later when the MUD opposition coalition annihilated the PSUV socialist party in midterm elections, or #6D as it was called. The MUD took a supermajority in Venezuela’s legislature, which would give them the ability to sack ministers and override presidential vetoes. I don’t think it’s a stretch to say there was jubilation among the opposition.

Had I spoken prematurely?

No, because then the rude awakening came.

Maduro further appropriated the already partisan supreme court and neutered the legislature. Venezuela’s congress is completely powerless, impotent. Any reasonable analysis would conclude that, despite the facade of elections, Venezuela is not a democracy.

The autocracy may now be on the brink of collapse due to blackouts, lack of water and medicine as well as food shortages which have caused widespread looting.

Analysts say there are three possible outcomes. The democratic option, which would be a recall referendum to oust Maduro by constitutional means, is a long shot. Two more scenarios are a “palace coup” or a bona fide military coup.

In a palace coup, a rival PSUV faction backed by the military ousts Maduro in favor of another chavista. This way socialism in Venezuela doesn’t die. Nobody knows whether such a faction would implement some market reforms to ease the economic suffering, or whether it will further repress dissent to continue following the economic model of Cuba and North Korea.

Another scenario is the military coup, in which junior officers currently outside the leadership mutiny against their superiors and the civilian government. In this scenario, the junior officers whose lifestyles are almost as miserable as most Venezuelans’ along with the foot soldiers overthrow the government, presumingly to return to a bona fide market economy.

So the recall referendum could materialize and Venezuela could find its way out of its current situation via democratic means. But either of the second two are a departure from democracy.

Why did I call a further departure from democracy?

Because Venezuela’s ruling elite is more like Syria’s than Cuba’s in that they are fighting for their lives.

I don’t see a quick implosion as in Romania’s Nicolae Ceaușescu, or a slightly slower implosion as in Rafael Trujillo’s Dominican Republic because there won’t be one simple assassination. Nor will there be a simple retirement to a house in the country for Maduro, Diosdado Cabello and the top leadership of the military.

Venezuela’s ruling elite is much more like Syria’s in that their very liberty is in jeopardy.

Syria’s Bashar al-Assad has held on this long because he is fighting to the death. His Alawite sect which controls government is so small as a percentage of Syria’s population that, in a region known for ethnic strife, he and his people would be slaughtered if they lost power.

Venezuela’s ruling elite doesn’t face ethnic cleansing, but they face prison. And not Margarita Island prison, but U.S. prison. Venezuela’s government is so corrupt that if control is ever transferred to an open, even somewhat transparent government, many of Venezuela’s leaders know they will face charges of corruption, money laundering and drug trafficking in the United States.

Wire fraud and money laundering charges are starting to appear against businessmen who deal with state oil company PdVSA. The company seems to make Brazil’s Petrobras look like a clean operation.

Just like cocaine shipments that end up on U.S. soil, any payments that occurred through U.S. banks give the United States criminal jurisdiction over Venezuelan nationals.

If they’re finding corruption with zero help, nay outright hostility, from Venezuela’s government now, what will they find when a new government opens up the books?

So the corrupt chiefs of Venezuela’s various fiefdoms have more than their money at stake in the fight for Venezuela’s government. They know the U.S. prosecutors will come for them someday.

Venezuela’s leaders are fighting to the death. No retreat, no surrender.

That makes Venezuela more like Syria than Cuba. While Cuba’s leaders are ideologically wed to their politics, they aren’t facing life in prison. That explains why the PSUV has armed “colectivos” throughout the urban poor neighborhoods.

Whether Venezuela’s next dictator is on the right or left, there will be a violent repression in order to move forward. There will be blood.

QCOSTARICA - With three major objectives for the growth...
Judicial