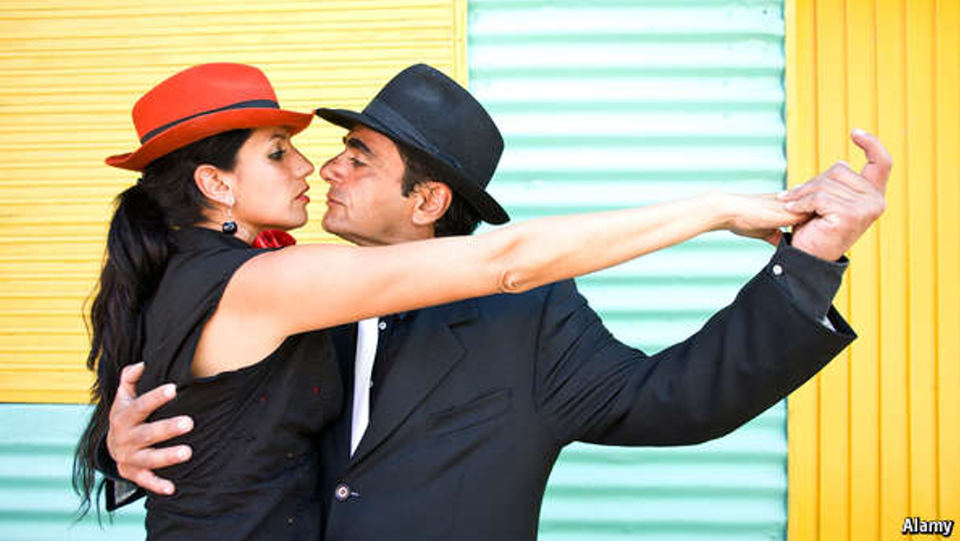 “CRISTINA’S pleasure” blared the cover of a 2012 edition of Noticias, a tabloid news magazine in Argentina. A caricature of the country’s president, Cristina Fernández de Kirchner, seemed to show her in mid-orgasm, her head thrown back, her mouth open.

Good taste is not how tabloids sell copies in any country, but it is hard to imagine a British red top describing a female politician quite so crudely. The treatment of Ms Fernández in Noticias points to a Latin American paradox. Women have made great progress towards equality with men, especially in schools, workplaces and politics.

But social attitudes have changed more slowly. Women’s ambitions are often belittled; hostility towards them is common. Raw statistics tell a story of female advancement; machista culture has yet to catch up.

In the past quarter-century, the proportion of women in the workforce has risen more in Latin America than in any other region. True, they typically hold jobs that require little skill and pay low salaries: domestic work is the largest source of female employment. But women now spend more years in school than men, which suggests that their prospects will improve. A handful have climbed to the top of the corporate ladder. Women lead Rede Energia, one of Brazil’s biggest electricity companies, and B2W, its biggest online retailer. Isela Costantini runs General Motors’ operations in Argentina, Uruguay and Paraguay.

Women are still scarce in Latin American boardrooms. Not in politics, however. A quarter of legislators in the region are women, compared with one in seven in 2003. Several countries, including Argentina, Brazil and Mexico, have adopted quotas for women on parties’ lists of candidates. In the past decade, voters have elected women to the presidencies of Brazil, Chile and Costa Rica as well as Argentina, where Ms Fernández succeeded her husband, Néstor Kirchner, who later died.

Yet Latin Americans are less likely than people in any other region to say that women are treated with dignity. Only a third say women are respected, around half the share who think so in the Middle East and Africa, according to a Gallup poll. In Peru and Colombia (where corporate bosses are more likely to be female than in any other Latin American country), just a fifth of people say women are appreciated.

The higher expectations of Latin American women may explain part of the difference with other regions. They are more educated than African and Middle Eastern women, and so are probably angrier about inequality. But it may also be that their success is provoking a backlash. Men have a “misconception that the pie is only so big”, says Louise Goeser, chief executive of Siemens Mesoamérica, a big engineering firm. They think that if they “give pieces away, there’ll be less for them.”

In 2009 48% of Latin Americans thought that women who earn higher salaries than men “would have problems”, according to Latinobarómetro, a polling group. That was up from 36% five years before. The share of people saying “men make better political leaders” and “a woman’s place is in the home” also rose slightly. The survey was conducted while Ms Fernández and Michelle Bachelet, Chile’s president, were serving their first terms. Electing women to high office is apparently no cure for sexism. 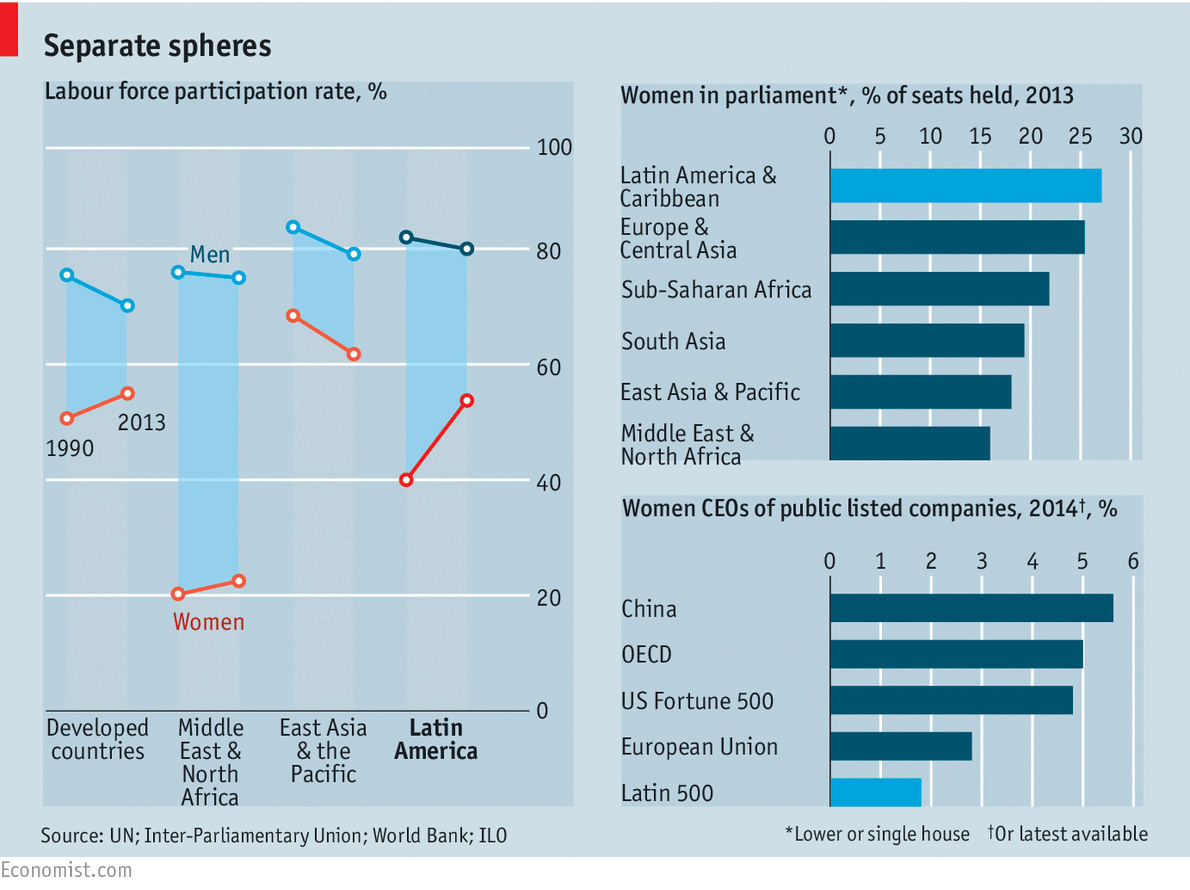 It can be found anywhere. In Latin America it feeds off a culture of machismo, a chest-thumping sort of masculinity that can either smother women in domesticity or degrade them. Successful women brim with tales of the insensitivity and cluelessness they encounter. Ms Goeser says that for years invitations to conferences came addressed to “Señor Goeser”. The boss of a Brazilian multinational recalls that earlier in her career higher-ups would ignore her at meetings until conversation turned to the cosmetics industry. Alil Álvarez Alcalá, a Mexican lawyer, worked at a firm for ten years before she plucked up the nerve to ask to be made a partner. Her boss looked befuddled and asked, “Is your husband’s job not going well?” She quit soon after and formed her own firm.

Working women bear the “double burden” of housework: on average, they do two to five times as much of it as their lazier mates. Even the most assertive women find themselves going along with convention. Hinde Pomeraniec, an Argentine journalist who co-founded Ni Una Menos (Not One Less Girl), an anti-violence movement, catches herself asking her daughter to help clear the table and clean the house before asking her sons.

Institutions reinforce such habits. Boys play football in after-school programmes; most girls go home. That matters. Girls who play sports get better grades and hold better jobs as adults than those who do not, according to a study by Barbara Kotschwar of the Peterson Institute for International Economics.

Machismo can terrify as well as discourage. “It’s hot here, but wearing a skirt or dress is asking for trouble,” says Nelsy Gutierrez, a middle-school teacher in El Salvador. Young women who venture out in cities on foot can expect a chorus of lip-smacking and shouts of “ay—how delicious” from motorists and construction workers. The problem is so widespread that legislatures in Argentina, Chile, Panama and Peru have passed or at least debated laws to ban catcalling.

The unruliest men kill and injure women as well as each other. Three-quarters of countries with “very high” murder rates for women are in Latin America and the Caribbean, according to the Small Arms Survey carried out by the Graduate Institute of International and Development Studies in Geneva. El Salvador has the world’s highest “femicide” rate, of 14 per 100,000 women. In Bolivia 52% of married or formerly married women say they have been physically or sexually abused by their partners. In Colombia and Peru that rate was a hardly comforting 39%.

The flip side of machismo is a traditional notion of femininity, which many Latin women embrace. At 15 girls are swathed in silk for lavish quinceañera parties. Of the past ten women who have been crowned Miss Universe, six have come from Latin America (including Puerto Rico). Even politicians play up their girlishness. Ms Fernández talks often of her love of clothes. “I was born made up,” she once said.

Many women think femininity is at odds with a belief in women’s equality, though it need not be. Feminism is thus a marginal creed in Latin America. Even female leaders less coquettish than Ms Fernández are reluctant to declare themselves to be feminists, for fear of being branded man-haters. That may be one reason why they have done less for women than many feminists had hoped.

Ms Bachelet, who was head of UN Women after her first term as president, has tried harder than the others. Her government recently created a women’s ministry and introduced a law that would decriminalise some abortions during the first 12 weeks of pregnancy. (Abortion is illegal in most cases in 18 out of 21 Latin countries.)

By contrast Dilma Rousseff, Brazil’s president, has introduced fewer pro-women laws than her (male) predecessor. Ms Fernández has been a bust, say feminists. Male politicians seem to have an easier time espousing policies they approve of. Uruguay passed one of the region’s most liberal abortion laws in 2012, under the administration of José Mujica.

There are signs, though, that attitudes may at last be starting to change. In Ecuador, young men who call themselves the Cascos Rosa (Pink Helmets) lead workshops in schools to encourage respect for women and girls. In Argentina, Varones Antipatriarcales (Anti-patriarchal Men) rally against violence (and for legal abortion). In June this year, hundreds of thousands of people in Argentina, Chile and Uruguay joined a day of protest against violence against women organised by Ms Pomeraniec and other Argentine journalists.

Governments are starting to do a better job of fighting violence and promoting women’s equality at work. At least 13 countries have established specialised police stations to encourage women to report assaults. This year Brazil enacted a law that stiffens punishments for men who murder their wives or girlfriends. Chile extended paid maternity leave in 2011 (under a male president) and Colombia’s Congress is considering a similar measure.

Businesses are beginning to improve conditions for working women. In a survey conducted by McKinsey, a consultancy, 37% of firms said gender diversity was a top priority in 2013, up from 21% in 2010. All this is encouraging. But it may be a while before Latin America’s culture catches up with the achievements of its women.

Via Economist.com, from the print edition: The Americas

QCOSTARICA - From the gallows humor department is the...
Reports