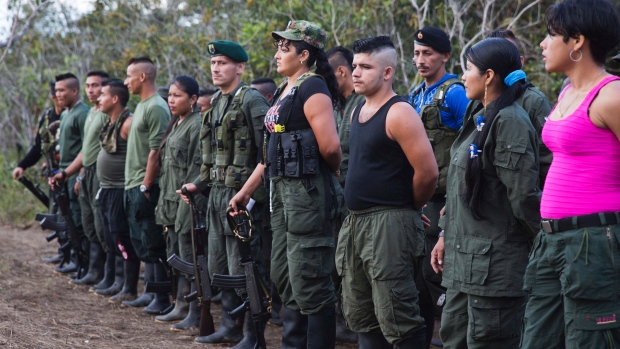 (Today Colombia) The deal negotiated over four years of talks in Cuba that would see Latin America’s oldest guerrilla group surrender its arms to United Nations monitors in exchange for a series of concessions from the Colombian state is expected to be signed next week, between the government of Colombia and the Revolutionary Armed Forces of Colombia, better known by its Spanish acronym FARC.

For 52 years, the FARC has operated from bases in Colombia’s jungles and mountains, nominally fighting for the redistribution of the nation’s land and wealth, but increasingly resembling an organized crime operation built on cocaine trafficking and kidnapping.

The group reached its peak of power more than a decade ago, when people who wanted to travel between Colombia’s cities often had to sign up for long, slow convoys under military escort.

Today, the situation has changed.

Colombia’s military has delivered a string of heavy blows to the guerrillas, killing their leaders and liberating their most prized hostages. Some Colombians feel the FARC is finally on the run, and have a hard time accepting the terms of the proposed peace accord.

Those terms would give the FARC 28 temporary safe areas where ordinary Colombians would not be allowed to enter.

The clause that rankles most, though, is one that would give the FARC five guaranteed seats in the Colombian Congress and five more in the Senate, for the next 10 years, even if the group fails to secure a single vote.

The FARC has so far respected its side of the deal. It has ceased its attacks, released its remaining hostages and this month began to demobilize its many underage fighters.

A key point of the accord is that the FARC are not surrendering but rather agreeing to peace, and therefore won’t surrender their arms to the Colombian government. The movement is anxious to show its followers that it is bowing out of the armed struggle undefeated.

And so its arms will be melted down and used to build three peace monuments, one in Bogota, one in Cuba and one at the United Nations in New York.

However, the deal could be short lived.

First, though, Colombians would have to ratify the peace accord in a referendum on October 2, 2016. Opposition is being led by former president Alvaro Uribe, whose military buildup turned the tide in the war against FARC, and whose own father was killed by the guerrillas.

Until last month, public opinion polls suggested that more Colombians might agree with Uribe than with the current president, Uribe’s former minister of defence and friend-turned-enemy Juan Manuel Santos.

But this month, support for peace began to climb, and the “yes” option now leads in the polls.

Santos will be praying that trend holds, or the historic peace deal Dion will witness next week will be dead just one week later, and Colombia’s long, bloody conflict will resume.

- Advertisement -
Paying the bills
Previous articleOscar Arias Says “No” To President In 2018, Warns He is Not Leaving Politics
Next articleCentral Banker Bargains Way Out of Prison in Guatemala