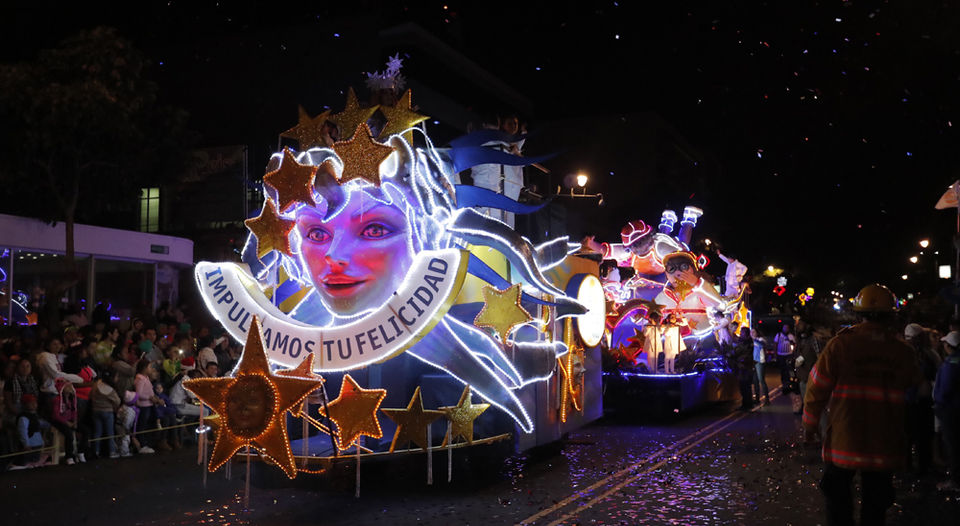 TICO BULL by Rico –You know it’s Christmas and you know school’s out by two simple events. The first one is the Festival de la Luz, the other is a total slowdown of the internet.

Let me comment on the second first. As soon as school is out there is a noticeable difference in the use of the internet, mostly in the speed and connection.

The end of the school year in Costa Rica is in the beginning of December. The new school year starts in February.

From the first days of the end of the school year to the new, you can experience at least a 25% drop in connection speed. In my case, connected to the www via Cabletica, my 12 Mbps down can get between 8 and 9 at the best of times.

Only in the small hours of the night, between 2am and 4am can I now see my 12, in between the speeds are from slow to a crawl to a standstill. This is most notable for us who work online, who are not just downloading (browsing or surfing the net), but actually sending data up to the server (or cloud). The connection speed advertises is mostly always the downspeed, internet service providers (ISPs) don’t make it a habit of telling you the upspeed. Back to my Cabletica, the 12Mbps sound great (for Costa Rica), but the 2 Mbps upspeed sucks, that is why they don’t highlight it.

These are the times you know school is out because sending a small image, for example, less than 100 Kb and getting confirmation to continue publishing, can take forever. Even more at times, if that is even possible.

As I sit, waiting for things to happen, I am quickly reminded, “school’s out”.

As to the first, the most magical time in Costa Rica is the one night of the Festival de la Luz (Festival of Lights), a time when the entire country comes together to watch, in person or on live television, the fireworks, the floats, the marching bands and of course Santa.

The night is a magical one.

In person, some arrive early Saturday morning (the even is always on a Saturday) to get a spot on the sidewalk. By early afternoon the few become the many. By dusk, there is little sidewalk space to call one’s own.

Up to only a few years ago, more than a million people – that is more than 20% of the country’s population – would gather in person in the area from La Sabana on the west side of San Jose, along Paseo Colon and the Avenida Segunda, to the Plaza de la Democracia on the east side.

Today, many prefer to watch it on television, avoiding the closed streets of the inner city, the ¢10,000 colones plus for a parking spot and head home madhouse at the end. The Municipality of San Jose doesn’t seem to place a lost of importance on what happens at the end of the festival. Shame.

Typically the Festival de la Luz is between the 9th and 12th of December. This year it was on the 17th, almost a week later. That was a good decision on the part of the organizers, since the rainy season this year didn’t leave San Jose until a few days ago. In the past a light drizzle was all part of the event, this year it would have been an all out rain.

Now that the Festival de la Luz is done with, what comes next in San Jose for Christmas?

Three important events: Zapote, Tope and back this year, the Carnaval.

The Zapote Fair,a alwasys, kicks off at noon on December 25. The annual event on the east side of San Jose this year may or may not include the bulls. As every year it won’t be up to the day before the event, even up to a few houre before, when the Health department gives the OK with the chinamos (street food), the megabars and the bulls.

It’s all part of the holiday traditions, what would we talk about if all was organized ahead of time?

On December 26 is the Tope, when the horses and their riders take over the area of Avenida Segunda and Paseo Colon, much in the same way of the Festival de la Luz, but in reverse order. The event starts on the east side and moves west to La Sabana.

The Tope is a daytime event. That means lots of sun and heat. And beer. Although drinking in public is illegal, for the most part the police close an eye.

Back this year, after a 10 year absence, is the Carnaval. The event on December 27 takes on the same route as the Tope. Filled with marching bands, cheerleaders, clowns and old cars, at least that’s the way it was, the Carnaval is an entire family event.

What I never understood in the past and this year is no different, why have the Carnaval after the Tope.

We know what the horses and the other four-legged and eventwo-legged animals do in public.

A team of street cleaners follow the end of the Tope to scoop up, but… well, enjoy.