QCOSTARICA – On her blog in Revistaperfil.com, Monica Morales speaks out on “acoso callejero” (street harassment”, saying “for me the ‘las cochinadas’ (filth) I like from my boyfriend while we’re having sex, not from a co-worker, not from a friend or some idiot online.”

Monica goes on to describe her latest incident, occurring only yesterday, deciding to get her car washed, when, before pulling up to the lavacar (car wash), she witnessed the ‘muchacho’ (boy) with the water bucket, stick out his tongue lasciviously at a girl walking by. Car wash vetoed.

“Simple things, like taking a car for a wash can be a real issue and a risk. It makes me afraid. It bothers me. Walking through San Jose for me means going as fast as possible, without looking at anyone and praying to go unnoticed,” writes Monica.

That sentiment is shared by most women, no matter of their age.

The latest (at least the latest reported) was on Wednesday in La Sabana park, where “Miranda” lived through worse of that of the young woman being filmed up her dress in downtown San Jose last week, when around 5:45am, while jogging in the park, a depraved man grabbed her and fondled her.

The story is being told by Miranda’s friend, Adriana Rosales, to Crhoy.com, “she (Miranda) decided to go by way of the lake, when a well dressed young man, maybe 27, started running towards her. She got scared, he grabbed her, touched her private parts, knocked her down, tried to kiss her; he kissed her neck, super aggressively, while telling her vulgarities,” explained Rosales.

According to Rosales, a woman passing by came to the aid of her friend, helping her escape, run to a police car only 50 metres away.

“Of course by then the guy had disappeared”, said Rosales.

What is frightening in that this type of abuse against women occurs in places where there is a police presence and in daylight. (In San Jose, the sun rises around 5:00am and full daylight by 5:30am, every day of the year).

“Miranda” considers that her attacker has done this before, “he had all the moves down, knew exactly what to do. Knew how to throw me down to the ground, everything well thought out”, according Rosales as related to her by her friend. 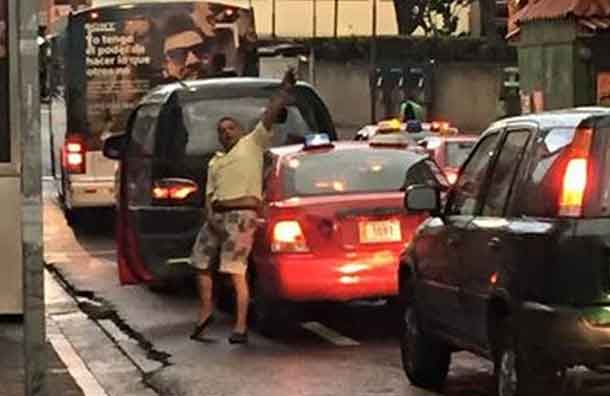 “The streets of this country are not my streets,” she says, relating the story of her friend, Cristina, who had the courage to report her case of street harassment, a process that took more than an hour to file her complaint in the Juzgado Contravencional (Misdemeanor Court), and who “had to explain to the officer what street harassment is”.

“I admire her for bravely reacting to the depraved taxi driver. I’m not that brave, I cringe and repress,” writes Monica.

Monica says she never wears a skirt or dress on the streets of downtown San Jose. “I wish my fear was unjustified, but no, most women in this country have been abused at some point in their lives,” Monica writes.