20% of Water Is Lost To Leaks in Pipes

For every 100 litres of water that leaves the supply tanks of the Acueductos y Alcantarillados (AyA), some 20 are lost to leaks in the 3.000 kilometres of pipes in the Gran Área Metropolitana (GAM) or Central Valley.

The loss is due to the poor state of pipes in the water and sewer utility’s distribution network, as well as damages from illegal construction and connections.

Add to that, another 27 litres that do not get to homes because they are used to supply fire hydrants and precarios (shanty towns). This is water that is not measured or metered and not charged to anyone –  that costs the AyA about US$160 million dollars. Funding for this comes from the Banco Centroamericano de Integración Económica (BCIE) – US$120 million and the rest from the AyA coffers. “We are seeking to reduce the loss by 17%”, says Nuñez. 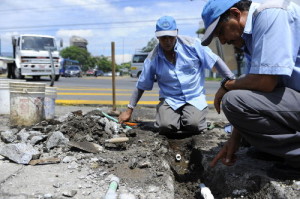 “There are pipes more than 100 years old. Also we have to take into account the shifting of the ground due to vehicular traffic, causing damage to the pipe network”, said Sergio Núñez, AyAs deputy general manager for the GAM.

According to Nuñez, the AyA gets about 1.200 reports of leaks per month  in the GAM.

Nuñez say the average response time is two days – that is two days that water flows freely from the system – and in some cases longer, depends on the severity of the damage.

“It is variable, but usually the repairs are done withing two days in the GAM”, says Nuñez.

Critics say a way of reducing the waste through leakage is through the replacement of the old pipes and reorganize the distribution network within the GAM.

Among the areas with the highest reported incidents of water leaks are: Cuidad Colón, Santa Ana and Escazú, all communities to the west of San José with the a high development growth and with old piping; Alajuelita to the south and downtown San José.

QCOSTARICA  - The 200 years of the Independence of...
Consumption