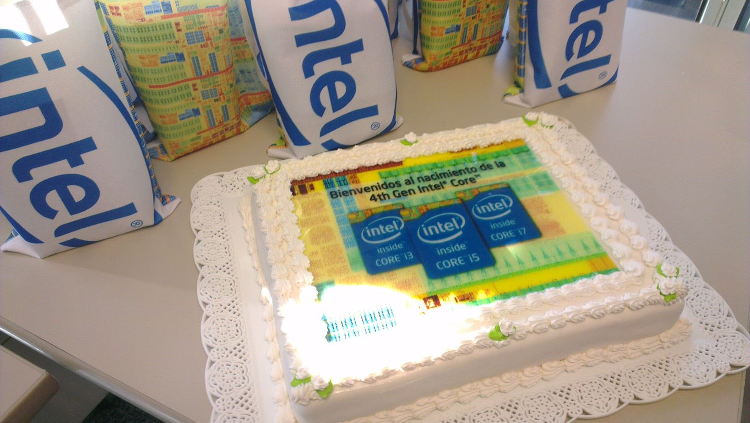 Our friend, former president of Costa Rica and Nobel prize winner, Oscar Arias made us aware of this article about Intel, written by Alfredo Elías Alfaro Ramos and published today La Nacion.

The following is a translation of the article. You can read the original in Spanish here.

The recent news left us perplexed: in the middle of a International Business course with my students of the Instituto Tecnológico, we got the news that Intel was leaving Costa Rica. I prayed to God that is was a rumour!

As the hours passed, the picture was clear: Intel was moving its manufacturing to Asia, and 1.500 manufacturing workers would be laid off. Left behind would be design staff (1.200 professionals including electronic and systems engineers) until closure, at the end of the year.

This is due both to the internaitonal financial crisis and the substitution effect (decreased demand for computers for the increased consumption of tablets and smartphones). Intel fell asleep at the wheel, there was a tendency in the market preferring tablets and smartphones instead of laptops, for which Intel had manufactured chips forever. Inded, the permanence of the Costa Rica staff is to work on new designs or applications for smartphones and tablets.

Causes. There are two important aspects to ponder: why Intel came to Costa Rica? And why is it now leaving?

Intel came to Costa RIca for qualified workers and the proximity to the United States and South America. Before coming to Costa Rica, Intel had two “suitors”, Mexico and Chile, which had the requirements the company was looking for, skilled labour and economic, social and political stability. After 15 years, the financial crisis and the lower demand for its products, the company began to reduce costs to compete with its main competitors. In its quest for efficiency, Asia was chosen as the new destination, where it meets all its manufacturing expectations.

Now, there are also domestic factors that played a role. Primary and secondary public education in Costa Rica has been decreasing its quality; however, the public university education has been increasing: in PISA tests in reading comprehension and mathematics, the country is below the Asians, we are above other Central American countries, but below the Asians.

This is an aspect that should draw the attention of the next government. The press and television has drawn attention to the point. How is it possible that to be a school teacher all that is required is a degree in education, while there is a lot of difference between public and private universities, as noted in various media reports.

Competition. My proposal is to improve public education, in primary and secondary levels, there should be a psychometric exam of knowledge for future teachers of schools and colleges to ensure those in the classroom are the best. This could explain the shift to manufacture in Asia. For example Intel is not going to another Central American country because the quality of its workforce would be lower than in Costa Rica.

The cost of electricity in Costa Rica is higher than the rest of Central America, although electric energy is generated from water. However, the cost is very high and we do not have a competitive advantage to promote to industries whose costs of production have a high percentage of us of electricity in the manufacturing process.

Intel’s decision to migrate to Asia is a consequence of the above. The new government has a huge challenge because it has to improve public education in elementary and high schools (unless we want to lose the competitiveness we have achieved with university education, which is the magnet to for foreign direct investment in high technology), and lower electricity costs in the country. The first point may be more complex; but the second is a matter of taking the example with insurance and telecommunications*.

A few years ago the textile industry migrated to Honduras, where non-skilled labour is cheaper, in which we could not compete. But in professional, specialized and skilled labour, we do have the advantage. Keeping the advantage in the technical workforce (graduates of the CTP and the INA) is vital so that other companies do not migrate to Asia (which is doing things better than we are, definitely).

There is the task for the new minister of education.

* Costa Rica has opened over the last couple of years the insurance and telecom market, where state institutions like the INS and ICE compete with private enterprise.

QCOSTARICA - Is there something worse than having a...
Lighter Side