Though it does not seem like it, this year to date, there have been fewer rainy days, when compared to the average of the last 14 years. 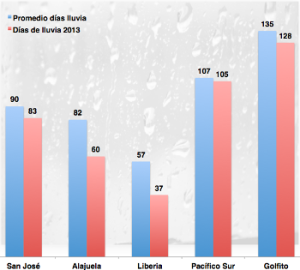 The areas with the least rain have been Guanacaste, San José and Alajuela.

Werner Stolz, chief forecaster at the IMN, explains that the lower rainfall is due to the strong period of “heatwaves” or “veranillos” affecting primarily Guanacaste and the central pare of the country.

Stolz said the the heatwave ended mid-August and normal rains expected for September and October, the wettest months of the rainy season.

According to the IMN forecasts, during this and next month we can expect rainy periods of between three and fours, with rainfall of up to 80 litres of water per square metre. These conditions are expected throughout the country.

Remember, for this month and next, never mind looking up to the sky to see if it will rain or not. Be prepared for rain and enjoy it just in case, though remote, it doesn’t.

Also be prepared for flash flooding, especially near rivers and creeks. Have rain gear – an umbrella, raincoat and galoshes – handy. Change the batteries on the flashlight and store it in a easy to reach place, have candles (and matches) available in case of power failures, and keep an eye out for electrical storms (lightning) that can accompany heavy rains.

QCOSTARICA - The prestige of the company of some of the richest men in Costa Rica hangs by a thread. For many, the MECO...
Economy