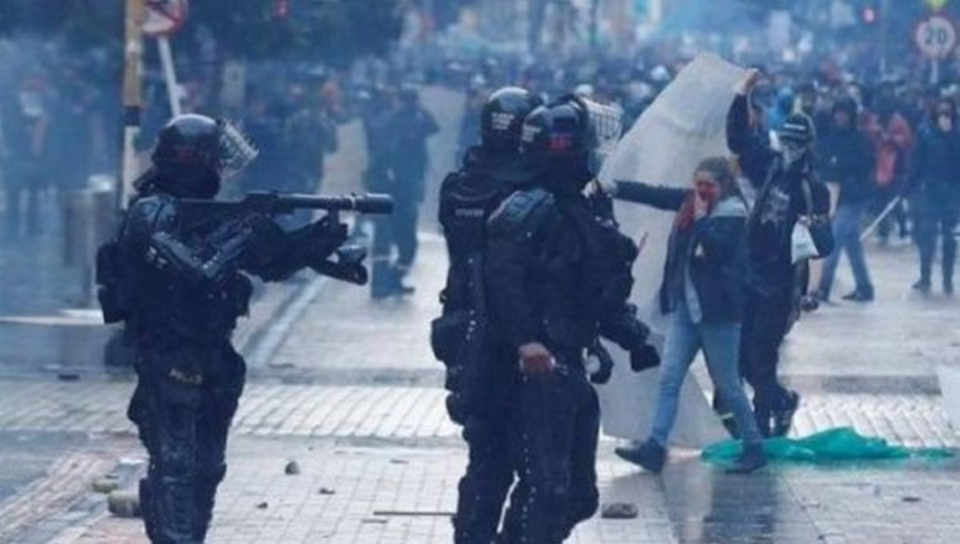 Colombia’s Defense Minister Carlos Holmes Trujillo on Friday confirmed that three people died and 122 civilians were injured during the nationwide strike against President Ivan Duque held on Thursday, when some 622 massive marches, rallies or other forms of protest were held in 350 municipalities across the country.

Trujillo also acknowledged that 53 raids were made, 98 people were arrested and another 207 protesters were “taken” to police stations.

While authorities were trying to justify police repression as a necessary response to halt “the vandals”, Colombians uploaded videos and photographs in which the police officers’ behavior can be observed.

Among those graphic records of police brutality, for instance, are photographs in which the Mobile Riot Squadron (ESMAD) members hit a woman in her face. There is also a video that shows more than five policemen kicking and beating a couple in downtown Bogota.

In a tacit reference to what happened in Bogota, Manizales, Cali, and Cartagena, the Defense Minister said that the police have already opened 11 investigations related to allegations of “possible irregularities.”​​​​​

“Details surrounding the deaths are also under investigation,” the Minister added.

Look where violence comes from. Cops are the ones throwing rocks. #Colombia #ParoNacional #represion pic.twitter.com/85PaH9MTCQ

The Thursday (November 21) national strike was called by the country’s main organizations of workers, farmers, students, and social activists to express growing discontent with Duque’s administration, which has been incapable of stopping corruption and the murder of human rights defenders.

Like what has been happening in other Latin American countries – Chile, Argentina, Bolivia, Ecuador, Brazil and Venezuela –  Colombian protests were systematically hidden yesterday by local mainstream media, which used different communication tactics to minimize the magnitude of citizens’ discontent.

In the coming days, demonstrations are expected to continue with different intensities and modalities.

Despite the obvious social and economic costs of his agenda, Duque is still trying to impose his policy package, which seeks to eliminate the state-based pension fund, increase the retirement age and hire young people with salaries below the minimum wage.​​​​​​​