30,000 Protesters Expected to March Against Gay Marriage in Costa Rica

Churches throughout Costa Rica are expecting 30,000 people to join in on a march in defense of traditional marriage slated for August. The gathering is meant to counter attack recent legislations allowing same-sex civil unions, abortion, in vitro fertilization and challenges to the ban on the morning-after pill. 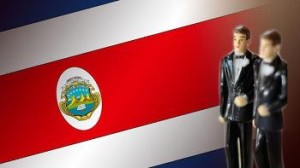 Organizers are calling for Evangelicals and Catholics to unite against what they say is a “combination of death” and hope that Costa Rican families can be restored according to “God’s design.”

“We are in favor of the traditional family of father, mother, siblings and grandparent’s and against civil unions and all that goes against what the Bible says,” said Justo Orozco, a Costa Rican evangelical legislator, according to the Hispanic news site, Mundo Cristiano.

“We want to demonstrate that we should not go against the Constitution, family and God’s word. We are a democratic country without discrimination, but majority rules,” he added.

The announcement of the march comes weeks after Cost Rica “accidently” voted to approve gay marriage, which caused an uproar among Costa Ricans and conservative lawmakers. The issue was brought to light when Orozco demanded President Laura Chinchilla veto the legislation, but she decided to sign it into law.

In addition to gay marriage, people are demonstrating against the Costa Rican abortion law, which is only permissible if a women’s life is at risk. Meanwhile, the Catholic Church is leading the charge against the overruling of Costa Rica’s IVF ban, arguing that embryos created in the process of IVF are oftentimes discarded or left frozen. And while it is currently illegal to sell the morning-after pill in Costa Rica, the law banning its sales has been challenged in previous years.

Planned Parenthood has pointed a finger at the Catholic Church for being a major reason for restrictions on abortion and the use of contraceptives in Costa Rica.

“…The strong presence of the Roman Catholic Church, as well as the continued use of abstinence-only-until-marriage curricula in schools, make abortion under any circumstance highly stigmatized and may hinder the likelihood of contraceptive use among unmarried adolescents,” the organization wrote on their website.

In spite of several controversial issues within the country, the upcoming demonstration aims to take place without causing social upheaval.  “It’s a peaceful march with music and prayer for the country,” said Juan de Dios Calderon, general coordinator and president of the Network of Evangelists and Prophets in Costa Rica, Mundo Cristiano reports.

Calderon also said organizers will gather signatures to send a declaration in defense of families to President Chinchilla and the President of the legislative assembly, Luis Fernando Mendoza.