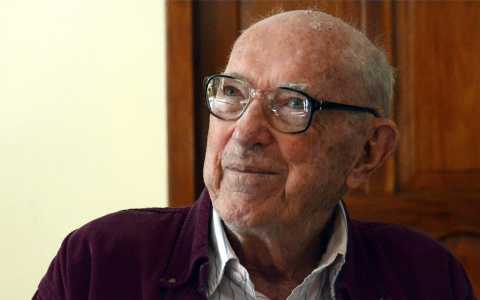 QCOSTARICA JOURNAL – MONTEVERDE, Costa Rica — Marvin Rockwell is a man full of stories. Originally from Fairhope, Alabama, Rockwell, 92, gives presentations about his life almost every day of the week to students, tourists or anyone else who might be interested in Monteverde, a hamlet in the cloud forests of Costa Rica’s northwestern highlands. He takes his plastic sandwich bag of photos almost everywhere he goes. He knows the story behind each one.

He is the patriarch of a small diaspora of Americans who, more than six decades ago, left their country when they felt their religious values were in jeopardy. Their impact on this traditionally agricultural region was deep, and they are still a visible part of the community here.

But times are changing in Monteverde. A tourism boom that transformed the economy, changing climate, conservation efforts and modernization continue to mold the community into something many of the earliest Quakers wouldn’t recognize.

Yet the community has witnessed it all alongside their Costa Rican neighbors, and the institutions they created — such as a school — continue to be the some of the pillars in the region. Despite all the shifts and worries over the future, it still seems that you can’t tell the story of Monteverde without also recounting that of the Quakers from Fairhope.

Rockwell went to Monteverde 64 years ago. The year was 1951. He was 28 at the time and had just finished serving one-third of an 18-month prison sentence with three other members of his community. The men had refused to register for the draft. They were Quakers, a religious sect with a strong emphasis on nonviolence and equality that traces its roots to 17th century Protestant dissenters in England.

Taking another human life is against Quakers’ faith, but failing to register for compulsory military service in the United States was against the law.

‘We and others in the meeting got to talking about it and thought, ‘Well, we ought to move out of the States.’ -Marvin Rockwell, 92-year-old Quaker in Monteverde

“We and others in the meeting got to talking about it and thought, ‘Well, we ought to move out of the States,’” Rockwell said. A meeting is a congregation of Quakers. The denomination’s official name is the Religious Society of Friends.

The Quakers of Fairhope began looking for a new place to live. Canada was too cold. Australia and New Zealand were too far. The group started looking at countries in Latin America. One couple went to visit several countries in the region to scout out a new home for the community. They decided on Costa Rica, “which had abolished its own army in 1948,” Rockwell said with a grin.

A mere eight days after his sentence was finished, Rockwell joined 44 Quakers from 11 families in Fairhope as part of an exodus to Costa Rica. Some flew; Rockwell and his family drove, including his 72-year-old father and 65-year-old mother. The journey from Fairhope to San José, Costa Rica’s capital, took three months. It took one month alone to get to the first town across the border from Nicaragua — a distance of 12 miles. It was before the Pan-American Highway was completed. The Quakers from Alabama made roads when they found none.

It is an intricate story that sounds more like fiction. Picking up Spanish as they went, the Quakers slowly made their way south through Latin America. Rockwell recalled one story. Several members of their caravan were swimming in a river after crossing into Costa Rica from Nicaragua. They noticed that some locals were frantically shouting at them in Spanish. That’s when they learned the Spanish word for “shark.”

“Sure enough, we saw a gray fin come out of the water,” Rockwell said, holding his hand up to look like the dorsal fin of a shark. Bull sharks are known to dwell occasionally in the rivers of Costa Rica.

The community settled in a highland agricultural region that came to be known as Monteverde. When they arrived here, the Quakers improved the roads, introduced hydroelectricity and built a bilingual school. The community established the region’s first corporation, a cheese factory that serendipitously used Quaker Oats canisters as molds. Rockwell, who received basic medical training during World War II, saw the region through a hepatitis epidemic. The community created the region’s first forest reserve, around the headwaters of a stream they used for water.

“The Quaker community had a very profound impact on the community because of their philosophy of peace,” said longtime resident Patricia Jiminez Castillo.

The Quakers intermarried with the locals. Rockwell and his wife had three children and adopted two more.

QCOSTARICA - The week of June 13 to 19 registered a decrease in the average number of deaths due to Covid-19, when 20 daily...
Trends

QCOSTARICA - For the first time in two months, less than 800 new cases of covid-19 in a single day were registered on June...
Reports

QCOSTARICA - No more soup for you! If the Minister of Public Works and Transport (MOPT), Rodolfo Méndez, has his way, the H. Solís...
Economic Recovery