Multinational assures that only eight workers will be unemployed; It will maintain its service and distribution center in our country 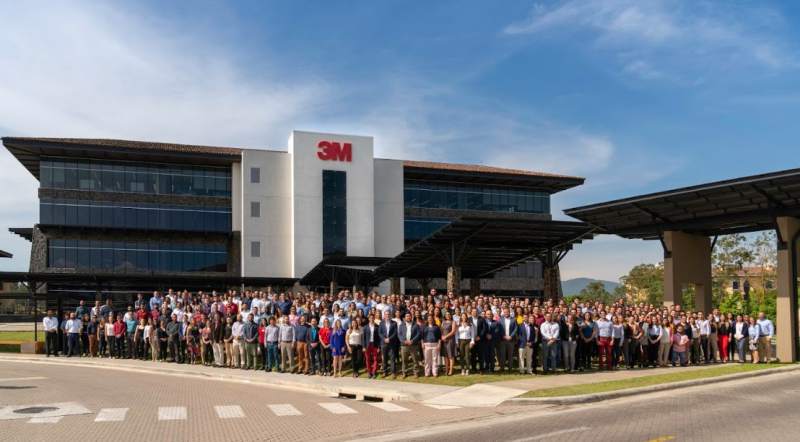 QCOSTARICA – The American multinational conglomerate 3M confirmed, this Monday, November 9, that it will transfer its manufacturing operations from Costa Rica to other Latin American countries, without clarifying which ones, and assured that only eight workers will be unemployed here.

In an official statement, the multinational informed that it will maintain its Global Services Center in Costa Rica, located in Belén, Heredia, as well as distribution at its plant in Santa Rosa de Santo Domingo, Heredia.

According to the company, with a presence in Costa Rica for 47 years, it employs some 1,300 people in the country. In the manufacturing operation that will enter a gradual closing process that begins in this month of November and will end in April 2021, only eight people.

“As a result of the continuous evaluation of the businesses and in order to ensure greater regional efficiencies and the simplification of its operations, 3M decided to relocate the production processes that were carried out in the manufacturing plant located in Santa Rosa,” says the company’s official statement.

This adjustment decision is made while at the end of October the firm reported that the net profit for the first nine months of 2020 decreased 11%.

The setback, however, was less than expected by analysts, who welcomed the increase in sales between July and September. That third quarter, the company’s sales increased 4.5%, compared to the same period last year.

Meanwhile, and in relation to the decision taken in Costa Rica, the consumer business processes (cleaning tapes and fibers) and abrasives (sandpaper sheets and rolls) will be produced in other plants located in Latin America, adds the official report.

The company clarified that the distribution of its products in Costa Rica will continue normally.

It added that the current 3M industrial offices will continue in Santa Rosa.

During the process, these employees will receive personalized support from the company, to support them in their career transition and in ensuring compliance with the country’s labor law, explained 3M.

The company also clarified that the decision is not due to the impact of the covid-19 pandemic, saying the decision had been taken before the pandemic.

Analysis on the news
Although only eight direct employees will be affected, the company does not state how many subcontracted personnel work there, which in the same way, will be impacted, therefore the number of people unemployed is much greater than indicated in the press release. This not counting the effect on local suppliers.

This is another multinational that packs their bags and leave the country, due to operational cost issues, that include the ineffectiveness of municipalities, central government and institutions that generate more obstacles, in order to maintain an irrationally remunerated state apparatus.

- Advertisement -
Paying the bills
Previous articleHow close is Costa Rica to getting the Pfizer Covid-19 vaccine?
Next articleCosta Rican Casinos vs Canadian Casinos

(The Guardian) When she first set foot in Costa Rica, Davia...
Read more

When I started my relocation tours during the early 1990s they...
Read more

Let us guess that you've got a grandiose idea...
National