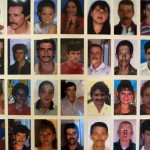 TODAY COLOMBIA – More than six million Colombians, some 12% of the country’s total population, has been directly or indirectly victimized in the country’s ongoing armed conflict, the government said Thursday.

According to the government agency, the number of reports of victimization have increased after the 2011 enactment of a law that seeks to repair victims and aid displaced farmers to return to their lands.

“Because of this, the number of people who report past violations of their rights is getting bigger. In fact, 78% of the reported cases in the first six months of 2013 correspond to previous years,” the unit said it its report.

According to the Victims’ Attention and Reparation Unit, the administration of President Juan Manuel Santos compensated 353,174 victims of the conflict until the end of last year. Little under 9,000 of these cases related to victims of forced displacement, of which non-governmental agencies say there are more than 5 million.

The governmental National Center for Historic Memory reported last year that some 220,000 people were killed in acts of political violence since 1958.

The Santos administration is currently engaged in peace talks with the FARC, the country’s largest rebel group and one of the main armed actors in the half-a-century conflict.