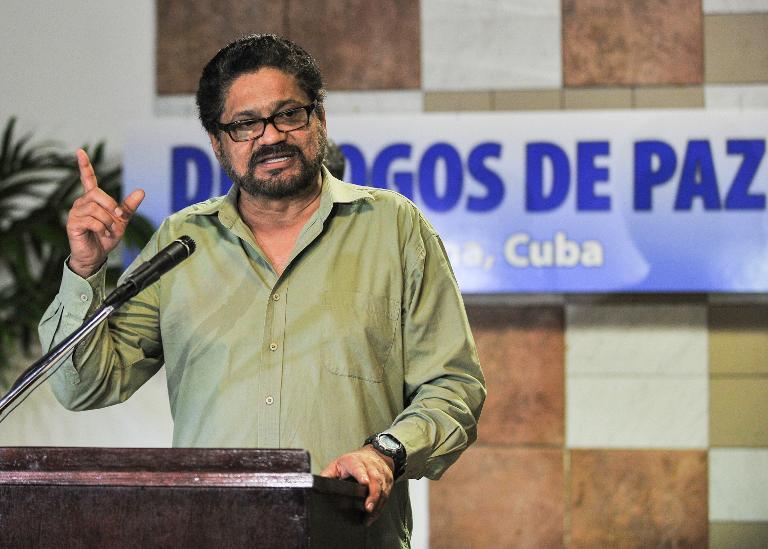 FARC-EP commander Ivan Marquez delivers a speech at the Convention Palace in Havana before a round of peace talks with the Colombian government, on February 5 , 2014 (AFP Photo/Yamil Lage )

The alleged spying was revealed Tuesday by the weekly Semana, prompting the firing of two military intelligence chiefs.

Among those allegedly spied on was President Juan Manuel Santos’ negotiating team at peace talks with the FARC in Havana.

In ordering a probe, Santos said “dark forces” were trying to sabotage the peace talks, but was not more specific.

However, the FARC’s chief negotiator at the talks, Ivan Marquez, pointed the finger at Uribe, a hardliner who has bitterly opposed the peace talks.

“Alvaro Uribe is behind this,” he told reporters before going into talks here.

“Don’t forget Alvaro Uribe Velez is public enemy number one of peace in Colombia,” he said.

Marquez said the spying also targeted the FARC’s delegation to the talks, and said the government should explain.

In Bogota, Santos said he had given the army’s inspector general ten days to complete his investigation. Colombia’s attorney general office is conducting a separate probe.

“This is an investigation that should not be hard to carry out because what they need to show is whether the intel work (the military) was doing was normal intel, which should be protected, or if they engaged in illegal intelligence gathering,” Santos explained.

Separately, a group of leftist leaders, including Bogota mayor Gustavo Petro, and human rights activists said they had received death threats from a crime group called Aguilas Negras, or Black Eagles, made up in part of former rightist paramilitaries.

Ivan Cepeda, a congressional candidate for the leftist Alternative Democratic Pole, told AFP the threats were part of “a campaign to destabilize the country and sow unrest to sabotage the peace process in Havana.”

Since November 2012, the Colombian government has been in negotiations with the FARC, the country’s largest and longest-fighting insurgency. It has been at arms since 1964.