A Plaza That Feeds Them 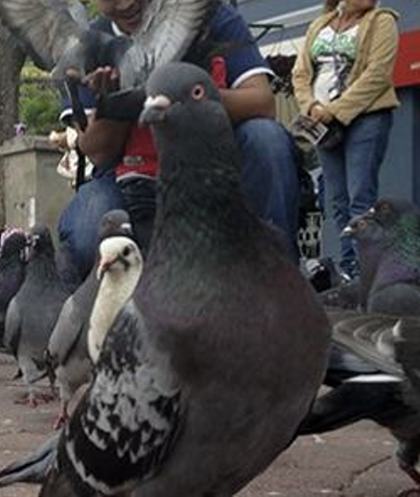 The Plaza de la Cultura in the heart of Costa Rica’s capital city is a major tourist attraction and a place to take a break and street watch for both visitors and locals. But, more than a tourist attraction it is also home to hundreds of “palomas” (pigeons).

Through the sale of corn in small bags, to photographs, balloons or “face painting”, more than 30 people substain the pigeons in the Plaza.

Despite the fierce opposition by the city of San José practice to street vending, dozens of clowns and photographers work the Plaza without problems thanks to “tolerances”.

Given its tourism value, Marcelo Solano, director of the San José Municipal Police, orders his officers to allow the public get a treat and the pigeons to survive.

The photographers nor the vendors are allowed, that is none are legally licensed to operate in the Plaza.  City officials do not concern themselves much with the photographs, but more with the sale of corn. The “photographers” say it is “very difficut” to sell pictures with the birds without the corn, to attract the pigeons.

While the pigeons are an attraction for some, they are a nuisance for others.

In a Trip Advisor post, a reviewer says, “thepark is nice, but has pigeons everywhere”. Another reviewer sees it different, the post reads, “I stayed at the hotel that faced this plaza. There is always a crowd, always something going on…”

Impossible to miss if you’re walking along the Boulevard (Avenida Central pedestrian way). All of a sudden you come upon an open plaza and you can’t help but smile.

Without a question feeding the pigeons is one the most popular pastimes at the Plaza de La Cultura. The other is people watching.

- Advertisement -
Paying the bills
Previous articleLiving With pigeons: The Economy around the Square
Next articleVenezuelans in Costa Rica Voted For New President

QCOSTARICA - Is there something worse than having a...
Politics