Activists Demonstrate Against Mistreatment of Bulls in Zapote

A group of activists demonstrated outside the redondel (bull ring) in Zapote today, protesting against the mistreatment of the bulls in the traditional year end bullfighting activities.

The group said they will be out in protest again on January 5.

Unlike other bullfighting events around the globe, where bullfighting is sometimes a fight to the death, in Costa Rica the bulls with the fight and no one dies. Often the bullfighters end up with bumps and bruises, as they literally run in front of  and then run away from the bulls. 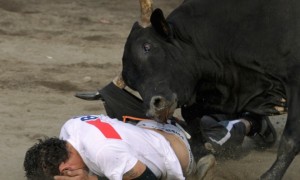 In Costa Rica the tradition of bullfighting – a staple in most of the annual fairs between December and March that are held in most Costa Rican towns – began as a diversion for as bull riders – not matadors – managed to remain on top. But the bulls reign supreme, some, like Malacrianza (Badass), have even have become celebrities in their own right.

The tradition of bullfighting in Costa Rica is more about “bragging rights”, riders paying to enter the ring and run in front of the bulls or to ride them until the are thrown off by the animal.

The riders are called “improvisados” (improvisors) or amateurs. There are no spears and contact with the bull is usually the bull horning the rider.

In Costa Rica bullfighting there is only rule – although the bull may kill you, no one kills the bull.

Today, Sunday, June 20, only vehicles with "EVEN" ending plates CAN circulate The measure is countrywide and applied between 5:00 am and 9:00 pm, save...
Economy

QCOSTARICA - Strengthen the attraction of Costa Rica to attract high-tech, innovative, and science companies to invest, is an initiative that stands out in...
Sports

QCOSTARICA - The Costa Rican judoka Ian Ignacio Sancho Chinchilla became this Tuesday the ninth Costa Rican to get the ticket to the Tokyo...