NEWS FOLLOW UP: The five assailants of the Casa Blanca in Moravia, who hid out in Lincoln Plaza Saturday, causing terror and panic for customers and employees alike, were freed today. 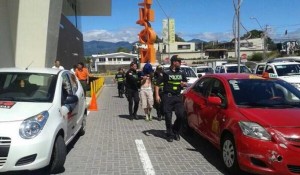 The deputy minister of Security, Celso Gamboa, confirmed that a judge of the Flagrancia (Flagrancy) court released the five on condition they sign-in at the courthouse every fifteen days.

Gamboa said he is respectful of the decision of the jugde. “We are in a democratic state…”, said Gamboa.

Saturday morning, five armed assailants who had just assualted a store in Moravia attempted to hide out in the Lincoln Plaza to avoid capture. A police operation was mounted, the mall was closed off, ending with capture of the individuals.

To become a successful gambler in the online industry, there is a lot to cover. It can be known to be a vastly different...
Latin America

Today, Sunday, June 6, only ODDS can circulate. The measure is countrywide and applied between 5:00 am and 9:00 pm, save for those under...
Photos of Costa Rica