I am sure that if Pope Francis would have handled this situation, he would have done it in a very different way, perhaps with much more respect for don Evangelista...writes La Nacion commentator

TODAY IN COSTA RICA – Zarcero is a small community perched on the edge of the Central Valley in the San Jose Highlands. The town is elevated 1,736 meters above the sea level, some 67 kilometers northwest of San Jose. Zarcero is the capital city of the canton of Alfaro Ruiz and one of the picturesque settlements in the Alajuela province.

It is like any other small Costa Rican town. But with a difference: the famed topiary garden of ‘Parque Francisco Alvarado’. Sixteen green arches fully decorated a series of vibrant shrubbery, sculpted and clipped into whimsical shapes, the garden is a must-see. Well-manicured shrubs in the park are fashioned as animals, dancers and oxcarts, stand before the San Rafael Church, inviting you to the evergreen paradise around it. 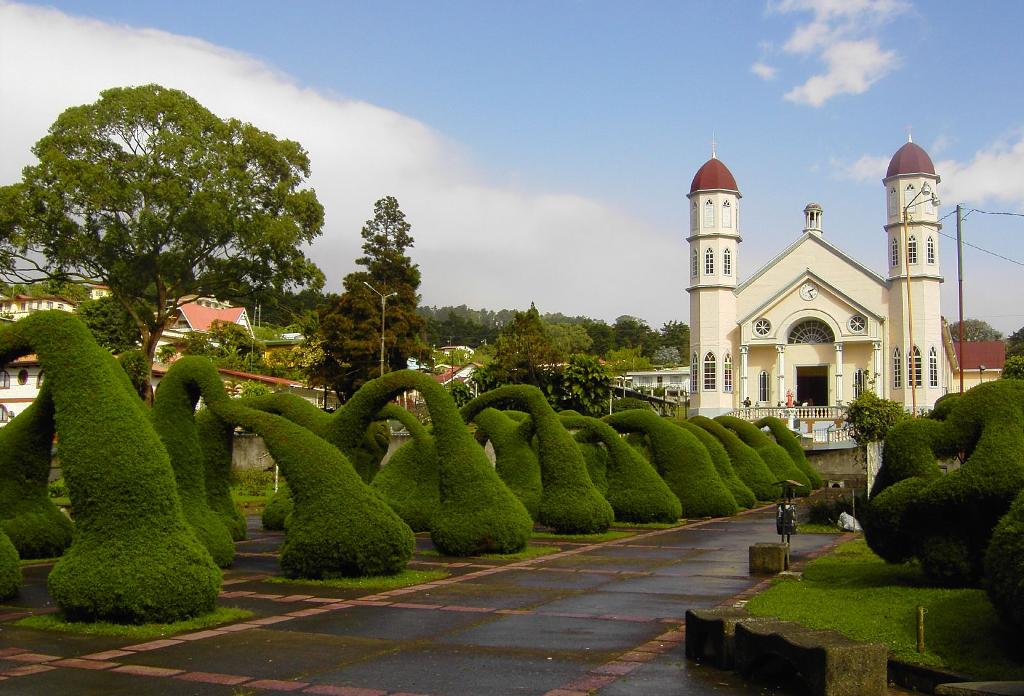 The particular beauty and tradition of the part has been, or at least had been for the last 52 years until last Friday, in the hands of one man, don Evangelista Blanco.

Was is because, after more than a half century of maintaining the park that became a tourist attraction in the area, don Evangelista was fired by the local priest, Kenneth Castillo.

Don Evangelista, 79, says that he would have liked that his departure had been of another form and not as it was given.

The firing was such that the Ministry of Labor (Ministerio de Trabajo) is investigating the case to determine if the dismissal occurred in the correct form.

The Diocese of Alajuela supports the decision of the priest, given that don Evangelista has health problems, especially with his sight.

However, the Ministry is clear that before taking such a measure (firing) for this cause there must be a medical opinion.

For his part, Bishop Angel San Casimiro told La Nacion that it is better to be safe than to lament an accident, which if it happened, would generate a high cost for the Church. That is to say, ‘you have to watch the colones’.

However, in an opinion piece in La Nacion, Pablo Ureña, a lawyer, writes, “as in everything in life, in this case also the form counts: they were not dismissing any employee; were dismissing the creator of a work of art he built and cared for over five decades on the grounds of the Municipality of Alfaro Ruiz … They did not fire him, either, for a just cause, but, as the Church admits, on the unilateral will of the patron. Was it necessary, to execute that will of the employer to treat him like a thief? If the concern was for his health, was it not possible to hire an assistant to carry out the riskier tasks under his direction instead of disposing of him as useless?”

In the opinion of Ureña the sculptures are ‘artistic material’ and the Church must pay don Evangelista the rights of his work, otherwise, the Church will not be able to touch these works, nor modify them, nor exploit them in any way, for it will be modifying, or exploiting, a creation of which it does not own, but that of a third party that has legitimate rights over them.

I am sure that if Papa Francisco (Pope Francis) would have handled this situation, he would have done it in a very different way, perhaps with much more respect for don Evangelista, with a more Christian attitude and thinking more about what this artist leaves behind…”Poor Francisco, with the oxen he has to plow!”, writes Ureña.

On Monday, a petition on Change.org was created to collect the 1,500 signatures needed to request the Government of Costa Rica “to declare the Zarcero Park national patrimony and that it changes to the hands of the municipality”.

While the Ministry of Labor investigates, the petition collects signatures and possibly the Church does the right thing, don Evangelista said he will continue visiting the park, “spending the remaining days that God gives him” with his creation.

(ACI Prensa) The Diocese of Quesada in Costa Rica has set...
Read more

QCOSTARICA - The week of June 13 to 19 registered a decrease in the average number of deaths due to Covid-19, when 20 daily...
Redaqted