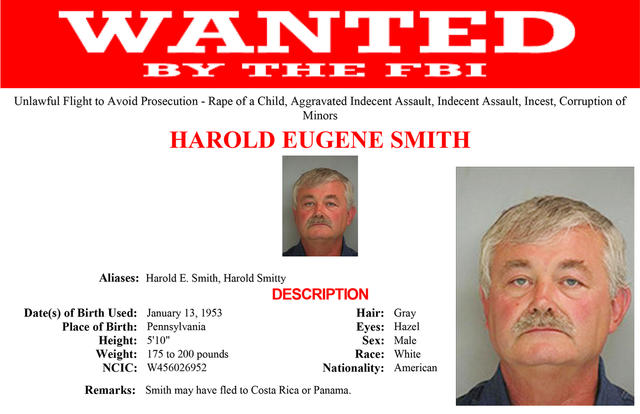 Harold Eugene Smith, wanted by the FBI for allegedly raping a 13 year old girl in the United States, brazenly moved about Costa Rica for the last 18 months using his true identity, until he was nabbed by immigration officials during a routine operation in Puntarenas.

According to the CRHoy.com report, Smith had visited a number of tourist areas, mainly in the beaches of Guanacaste and Puntarenas. On June 2, however, his luck ran out during a routine immigration operation. Smith was using his original passport and his tourism visa had expired.

Kattia Rodriguez, director of the immigration service, confirmed that Smith was picked up by immigration officials in the area of Puntarenas, being in the country past his 90 days tourism visa period.

Smith is currently in the Hatillo detention centre in San José, a holding centre where foreigners are taken to while their immigration status is resolved.  Although there is no confirmation of what will happen to Smith, it is mostly likely he will be deported to the United States in the coming weeks.

“These are people we do not want here, people with profiles we are looking to deport”, said director Rodriguez.

According to immigration sources, Smith had been staying in a downtown Puntarenas hotel for several weeks and then moved into a private home. More, Smith had come back and forth to Costa Rica on several occasions between 2011 and 2012, the last time he entered Costa Rica was in November 2012.

Rodriguez admits that, despite an Interpol alert, Smith’s entry into Costa Rica was no detected by immigration.

In June of 2010, law enforcement officials in Upper Dublin, Pennsylvania, began investigating a complaint that Smith had allegedly raped the girl on a routine basis, later described as between one and three times a week, when the girl was 12 and 13 years old.

A local arrest warrant was issued for Smith on September 15, 2010, in the Pennsylvania, County of Montgomery, after he was charged with rape of a child, aggravated indecent assault, indecent assault, incest, and corruption of a minor. He was arrested on the charges and made bail, but failed to attend a subsequent hearing and a bench warrant was issued on January 10, 2011.

A federal arrest warrant was issued for Smith in the United States District Court, Eastern District of Pennsylvania, on October 16, 2012, after he was charged with unlawful flight to avoid prosecution.

A report by the Dirección de Migración y Extranjería (immigration service) shows that Smith first entered Costa Rica on February 2, 2011, less than a month after he failed to appear in court.

The report also reveals that every time Smith entered and left by either the San José (Juan Santamaria) and the Liberia (Daniel Oduber) airport.