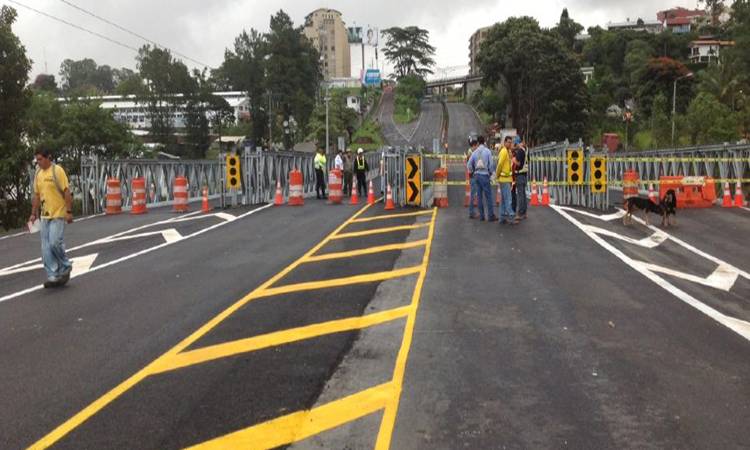 The four Baileys are in place, the road is paved and the lines painted. What is left are last minute inspections and removal of the barriers.

Starting at 4pm Wednesday, the traffic on the Circunvalación will resume. However, there will still be closures between 10pm and 5am, says CONAVI officials, this for security reasons.

On Wednesday, work begins on the permanent structure that once finished next May will be a six lane bridge.
ORIGINAL POST EARLIER TODAY….

The Consejo Nacional de Vialidad (CONAVI) assures that the Circunvalación between Pavas and Hatillo 8 will open before the November 17 deadline.

In fact, on Monday work was suspended for several hours allowing vehicular traffic on two of the Bailey bridges, to alleviate the congestion caused by the day’s protests in San José.
CONAVI officials said Monday afternoon all that by Thursday or Friday at the latest, all four Bailey bridges will be open, restoring normal traffic conditions to the area.

The following week construction of a permanent bridge commences.

QCOSTARICA - The sustained growth in the arrival of...
Trends