Come to think of it, only Lady Gaga could save us" was the response on Twitter 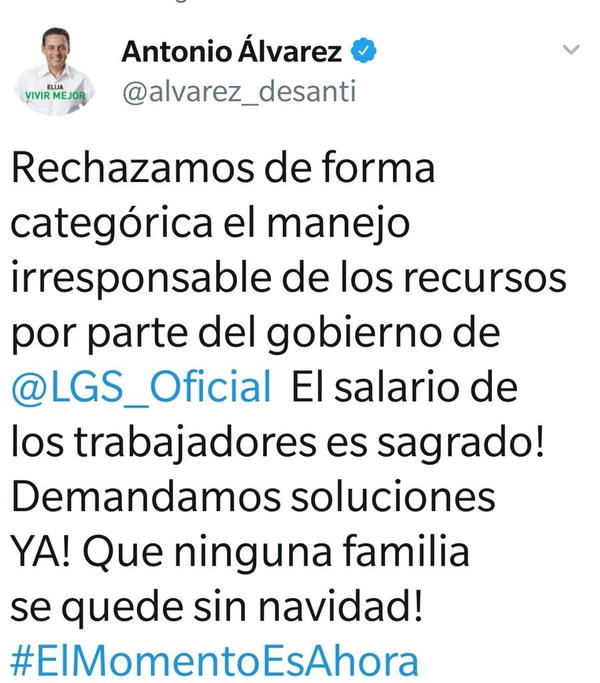 The not so happy Desanti made his complaint over whether or not public servants would get their mid-December paycheck Thursday night public on Twitter @LGS_Oficial.

The politician wrote, “the worker’s salary is sacred! We demand solutions NOW! That no family is without Christmas!”.

The problem is that the Twitter @LGS_Oficial does not belong to the President of Costa Rica, rather to a Lady Gaga fan club in Spain, which strongly responded to the complaint.

“Hello, we are a Lady Gaga account, you have been confused,” was the answer from @LSG_Oficial.

Among the comments that followed on Twitter, @KarenGatoAzul, wrote: “Desanti denouncing Lady Gaga for not paying salaries, this made my the afternoon hahaha (jajaja in Spanish)”.

And @Deprotti said, “my favorite moment of this election campaign”.

Our favorite is by @ALabLu, “Come to think of it, only Lady Gaga could save us”.

What was all the bruhaha about? Typically the central government deposits salaries the early in the evening before payday (15th and 30th).

However, on Thursday, the Ministerio de Hacienda (Ministry of Finance) had a problem in getting the deposits made as usual, instilling concern that the government would be able to meet its obligations.

Starting at 9:30 pm the ministry of finance began making depositing the ¢80 billion colones to the accounts of the 132,000 public servants.

Public employees will have the entire Semana Santa to vacation

RICO's DIGEST - It can be said, in Costa Rica, better...
Read more

QCOSTARICA - A study by the firm Kantar revealed...
Health