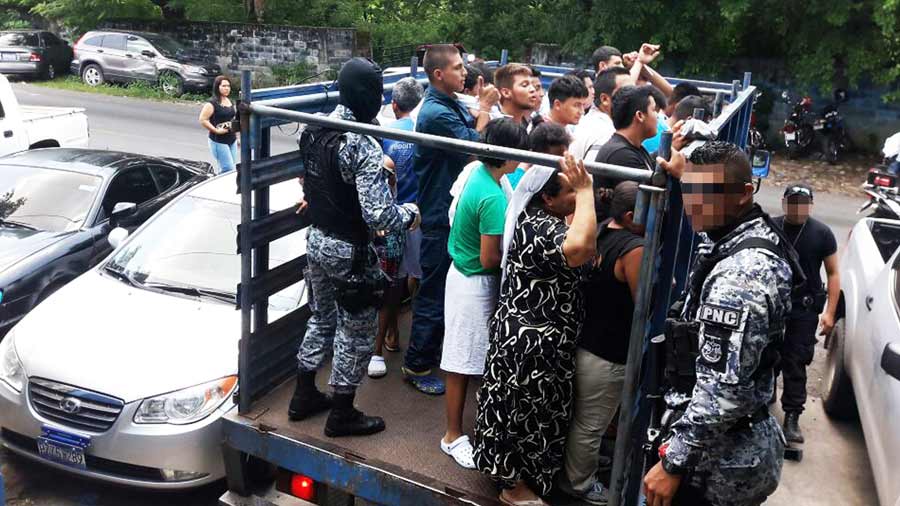 QCostarica via InsightCrime – Authorities in Central America have arrested hundreds of suspected gang members in recent days during coinciding operations, but their willingness to mount such large-scale efforts against gangs has not been matched by an equivalent committment to tackle recent allegations of serious official corruption.

Officials described the anti-gang sweeps, dubbed “Operation Regional Shield” (“Operación Escudo Regional”), as transnational and coordinated. But they played out entirely at the local level, and little aside from the timing suggests there was a transnational aspect to the initiative.

El Salvador’s Police Commissioner Howard Cotto said on September 12 that 420 suspects had been arrested so far in local operations carried out in his country, including “at least 10 leaders of criminal structures.”

The ongoing operation, which officials say has targeted at least 13 “clicas,” or cells, of the MS13 gang, has also led to the arrests of several security officials and a former mayor who has been accused of providing cash and weapons to gang members in exchange for their support during his political campaigns.

Guatemala’s Attorney General’s Office also announced that 358 local police raids in the country had led to 163 arrests on September 11 as part of the “transnational operation against extortion.” Firearms, ammunition, vehicles and cocaine were also seized.

The Honduran Attorney General’s Office offered public support for the anti-gang efforts, and counted several arrests made as part of an ongoing local security initiative as contributing to Operation Regional Shield.*

Press statements and social media posts by the Attorney General’s Offices of all three Northern Triangle countries also cited support from the United States government for the operation.

Northern Triangle governments billed Operation Regional Shield as a successful, transnational operation against “criminal structures.” But while they may be politically expedient, the mass arrests are unlikely to have any substantial long-term impact on gangs’ ability to operate in these countries. And perhaps more concerningly, operations like these may be drawing resources and attention away from investigations into mounting allegations that high-level elites across the region have engaged in criminal activities.

In El Salvador, a series of recent revelations have exposed the extent of the relationship between country’s politicians and gangs, the engagement of police officers in death squad activities and alleged government efforts to support a breakaway faction of the MS13. However, official investigations into these incidents have not moved with the same rapidity as the near-daily operations against gangs in the country.

In fact, some current and former top officials accused during a recent trial of orchestrating a gang truce as a “state policy” have not been charged with any crimes. And police accused of belonging to anti-gang death squads have been put on “desk duty,” while other officers who allegedly smuggled cell phones and marijuana into prison for gang members have been jailed.

Guatemala too has struggled to proceed swiftly and successfully with probes into elite corruption. The congress recently voted to protect President Jimmy Morales’ immunity from prosecution, blocking further investigation into the leader’s campaign finances, which may have included contributions from alleged drug trafficker Marlon Francesco Monroy Meoño, alias “El Fantasma.”

In a message posted on its official Twitter account, the US embassy attempted to highlight how Guatemalan elites are moving to protect themselves from graft investigations rather than addressing these problems head on. The message followed shortly after news broke that the congress had voted to introduce legislative reforms that would protect politicians from charges related to illegal campaign financing.

A former president of Honduras, Porfirio Lobo, has also been reported to have ties to drug traffickers. His son, Fabio Lobo, was sentenced to more than two decades in prison by a US court recently after he pleaded guilty to conspiring to traffic cocaine. But the elder Lobo remains a free man, and denies any involvement in wrongdoing.

Even as these types of scandals of elite corruption continue to shake the region, the latest arrests in El Salvador and Guatemala suggest that authorities are continuing with business as usual when it comes to localized, heavy-handed anti-gang operations, rather than shifting their efforts towards the elite corruption that facilitates so much criminality in the region.