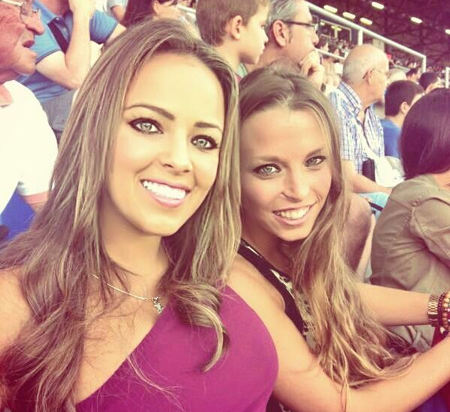 COSTA RICA EXTRA – While Keylor is big news for his joining the Real Madrid, his wife captured the attention of Spain’s media, seeking tidbits about the couple that recently arrived in the European country.

Andrea Salas, is now part of the “farandula” (celebrity gossip) and will be probably be one of the striking figures of the Spanish soccer league.

Keylor’s insanely sexy wife Andrea Salas with whom he has been married to since 2009, is a mommy of two, Daniela her  daughter from a previous relationship, and Mateo, the son with Keylor.

The magazine Divinity called Salas, “nothing less than an international model.”

Salas modeled until marrying Navas, the goal keeper that brought Costa Rica’s national team within a couple of wins of a World Cup victory,

“Andrea Salas, la explosiva mujer de Keylor Navas” read the headline of Spain’s Diaro Bernabéu, whose article inside says Salas was one of the hottest “WAGS” ( is an acronym used to refer to wives and girlfriends of high-profile sportsmen) of the World Cup in Brazil.

QCOSTARICA - Dr. Mario Urcuyo, an expert in the...
Pura Vida