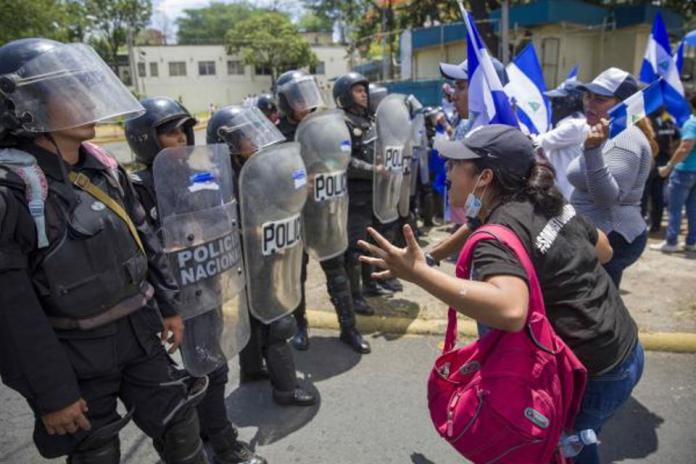 Nicaragua’s national police force has garnered international praise in recent years for reducing crime one of the lowest levels in Central America. But, with officers accused of attacking and killing demonstrators in the past five weeks of anti-government protests, it has quickly become one of the hated groups in a country in crisis.

The Inter-American Commission on Human Rights (IACHR) that visited Nicaragua last week, at the invitation of President Daniel Ortega heeding to the demands of protesters, on Monday issued a reported blamed police and civilian groups associated with the police for most of the 76 deaths and 868 injuries of protesters or protest supporters

Their objective is repression is the sentiment by many Nicaraguans. President Ortega and the police are called “asesinos” (murderers) by citizens on the streets, on social media and street graffiti. They are depicted as the dirty dogs controlled by Ortega.

Both sides are muddying the issue, both sides claiming the violence is coming from the other. This has led to university students leading the protests, some to arm themselves, in defense of the police.

Saturday, one day after the ‘National Dialogue’ was suspended by the Episcopal Conference of Managua that had accepted the role of mediator between the government and opposition and despite the work of Ortega on the first day of the talks a week earlier, when he said “it is done, the police are in their barracks” that was clearly not the case.

A widely shared video of the incident on Saturday doesn’t make clear if the attackers of the university students were police. The police deny their involvement. But doesn’t stop the people assuming it is the police or police sponsored actions.

“You can’t trust anyone in a uniform,” said Wyman Bacon, a resident of Managua who has been documenting the protests.

“The people don’t trust them anymore. Their objective is repression,” said a university student protester who asked not to be named. “They’re there to attack and oppress us any way they can — bullets, bombs, whatever.”

Supporters of the Ortega and the Sandinista government has another view. They blame the university students for the killings, the students causing the problems, the students attacking the police, the police only defending themselves.

This is a sentiment aired by Ortega himself on the first day of National Dialogue. At the only day Ortega made a personal appearance at the talks, he spoke about how the police had to defend themselves from the protesters. “They are not little angels,” in reference to the university students.

At rallies coordinated by the Sandinista Party across the country, supporters wave the party’s red-and-black flag next to those waving the country’s blue-and-white flag.

Experts in policing methods say what Ortega did was blur the line between his government and the police, turning it into a political organization.

A 2016 USAID-funded study found, out of 26 countries in the Americas, including the United States and Canada, Nicaraguans had the eighth-highest confidence in their police force. That same year, Nicaragua Police Chief Aminta Granera, an Ortega appointee, spoke about her country’s policing methods at the Center for Strategic & International Studies in Washington, D.C., which described Nicaragua as a “sea of calm.”

The reality, however, the Ortega government has been destroying the police force.

In 1996, Ortega, then the opposition leader in Nicaraguan politics, the law was changed so that the police force was separated from the presidency by being placed under another government branch.

When Ortega returned to the presidency in 2006, his inherited ‘clean’ police force helped push the crime rate down, despite the few resources from a government of one of the poorest countries in the Western Hemisphere.

After Ortega’s 2013 re-election, he changed the national police law back to the way it used to be — with him in charge. The 2014 “Law of Organization, Functions, Career, and Special Regimen of Security of the National Police” made him the “Comandante” (supreme power) of the national police, granting him unlimited power.

The use of deadly force by police was back at protests, such as the protests against the “Gran Canal” and the anti-union busting protest by gold miners. In both incidents, protesters suffered injuries at the hands of the police.

The police were also in action to squash protests against Ortega’s plan to change the election laws that allowed him a consecutive third term.

The country changed after that.

Q24N - The recent summit of the Community of...
Economic Recovery