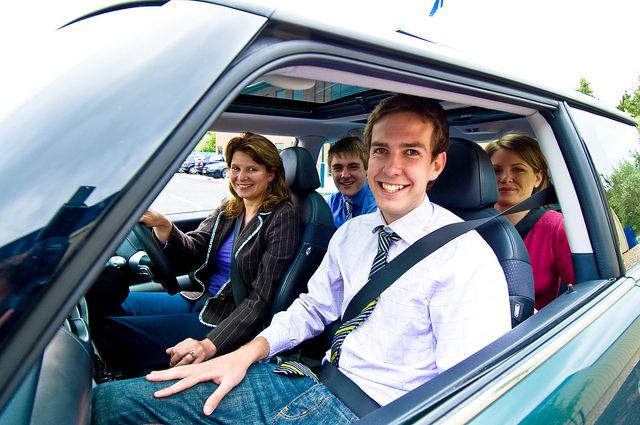 QCOSTARICA – Carpooling may be a solution to the infernal traffic chaos in the Greater Metropolitan Area (GAM) of San Jose. And Raúl Martín, who lives on the east side of town and works in the west, is betting that the car sharing app he is working on, Workride, will catch on.

Workride is platform geared towards companies, with the goal to incentivise carpooling within its employees.

According to the project information on Changemakers, the main issues with carpooling, are that people have concerns about security and flexibility. Workride solves this by targeting specific closed groups of people, such as companies, where there’s a degree of trust between them.

Workride is also one of eight projects accepted into Open Future incubator in Costa Rica, and currently a Finalist on 2015 edition of “Yo Emprendedor”, one of the top 500 Latinoamerican projects on “Premios Latinoamerica Verde”.

In a report by La Nacion, coming on board with Workride are two major companies located in the San Jose area, Movistar and Purdy Motor (Toyota dealership). The two companies plan to start using the platform in the coming months.

In terms of projected future impact, Martin and co-founder, Rodrigo Estrada Alfaro, believe they can reduce between 5-10% of single traveler cars used at every company that has Workride. For a company with 1,000 employees travelling with cars, this means at least 50 less parking spaces they have to rent, 50 less cars means less CO2 is released into the environment each year.

“The apps seeks to put to work the cars at full capacity. During the field research, we went to an afternoon stop at Forum in Santa Ana, and in 75% of the cars there was only one person,” said Martin.

To use the platform, employees at Movistar and Purdy Motor must access the app, add their information (ie start and end of work time, usual route, type of vehicle and capacity, etc) and indicate whether they are willing to give ride or want a ride.

According to the last report State of the Nation (Informe del Estado de la Nación), last year a total of 1,399,238 vehicles circulated in the country.

In addition, in 2014, a study associated with Urban Planning Project of the Great Metropolitan Area (PRUGAM) for the Ministry of Housing revealed that the inhabitants of the GAM lost 15 days a year stuck in traffic.

In June 2016, with more cars and even greater congestion, we can safely say that the lost days are much greater, maybe even doubled that.