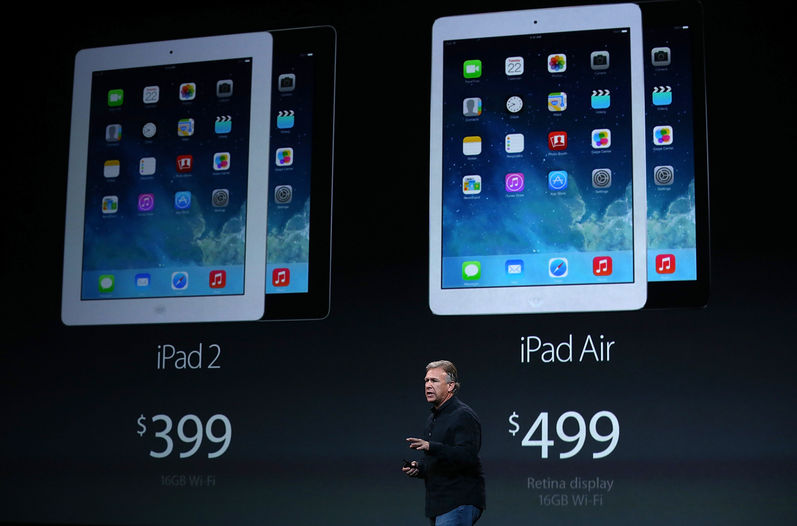 Thinner. Lighter. Faster. That’s what Apple promises in its newest iPad, which also has a new name: the iPad Air.

The Cupertino company rolled out the fifth generation of its market-leading tablet Tuesday. Among its new features, the iPad will weigh 1 pound, down from 1.4 pounds. It’s 20% thinner and 28% lighter than the current fourth-generation iPad.

The iPad Air will have the same 9.7-inch screen as previous iPads and pack the same A7 processing chip that’s in the iPhone 5S. That will make it 72 times faster than the original iPad, according to Apple Senior Vice President Phil Schiller.

“This is our biggest leap forward ever with a full-size iPad,” Schiller said.

No word yet when the iPad Air will “officially” be available in Costa Rica.

Schiller also announced an revamped iPad Mini starting at $399. It will be available later in November in silver or space gray and will pack a speedy A7 processor and the same high-resolution “Retina display” as bigger iPads. The older iPad Mini is still around and will cost $299. And the full-size iPad 2, launched in 2011, is still available for $399.

Apple took another new direction on Tuesday, announcing that the newest version of its Mac operating system, OS X Mavericks, is available now for download and will be free.

Selling Mac software has never been a huge money-maker for Apple, and the price of OS X upgrades had been dropping in the past few years. The move can be seen as a shot at Microsoft, which relies more heavily on revenue from sales of Windows.

New MacBook Pro and MacBook Air laptops also were rolled out and go on sale immediately. They get the usual incremental updates: better graphics, longer battery life, faster flash storage and next-generation Wi-Fi. Apple also announced that both iWork and iLife, their suites of office and creative software, are now free with the purchase of every new Mac.

And the super-powerful Mac Pro, the desktop computer geared toward high-end graphics and video editing, finally got a price point — $2,999 — and will be released before the end of this year, according to Apple’s Phil Schiller.

The Pro was designed in California and assembled in the U.S. across 20 states. The pieces are probably manufactured out of the country and shipped to the U.S. for the building stage.

Apple’s not the only tablet manufacturer with news this week. Microsoft officially launched its Surface 2 and Surface Pro 2 tablets on Tuesday morning, as did Nokia with its own Windows 8 device, .

The Lumia 2520 costs $499 and is Nokia’s first full-sized tablet. It’s also Nokia’s first big product rollout since it was announced that Microsoft was going to purchase part of the company.

But as rivals catch up to the once-dominant iPad and the marketplace gets flooded with new tablets, it’s getting harder for competitors to set themselves apart.

“Tablets are a maturing market; there’s not much competitors can do to differentiate at this point,” said Sarah Rotman Epps, a senior analyst at Forrester Research.

“Replacement sales are growing much, much faster than new sales worldwide,” she added. “You’re competing for customers you already have.”

At Tuesday’s event, Cook took a swipe at competitors with a reference that seemed most aimed at Microsoft’s hybrid Surface tablets.