Araya And MECO President In Secret Flight To Panama! 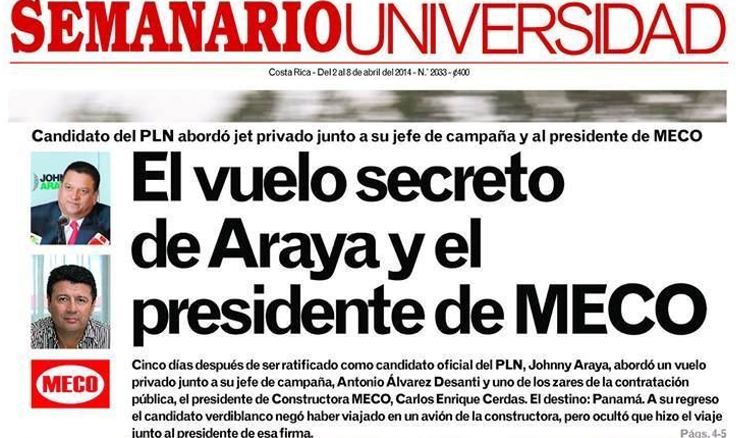 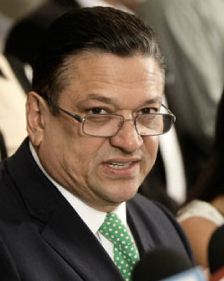 [/one_third]The flight took place five days after Araya was ratified at the presidential candidate for the PLN (in February 2013) and while he was still mayor of San José. Accompanying him was Antonio Álvarez Desanti, who would be his presidential campaign manager.

MECO is a major roads contractor in Costa Rica. According to the Semanario, MECO has been awarded some ¢35 billion colones in contracts by the Chinchilla and Araya administrations, including the lucrative asphalt mixture contract with the Municipality of San José.

Araya says he took the flight on the private jet to Panama for the Costa Rica – Panama soccer game. He said then, the trip was on a jet belonging to a businessman friend, but did not say that he had travelled in the company of Cerdas.

An investigation  of immigration records by the Semanario reveals that the three were at the Tobías Bolaños (Pavas) airport at the same time boarding a flight. This was on February 5, 2013. On record is a flight at 3:43pm on a private plane with the call letters N43EL.

The director of Aviación Civil, Alvaro Vargas, confirmed to the Semanario that on that day there was only one private jet leaving the Tobías Bolaños. Araya and Desanti returned on February 7, at 11:03am, landing in Pavas, while Cerdas arrived in Costa Rica the day following, at 1:21pm, landing at the Juan Santamaria international airport.

Deeper into their investigation, the Semanario publishes that, according to the Dirección General de Aviación Civil (DGAC), the plane, a Hawker Beechcraft, piloted by Armando Vega, flew to Panama and back. The aircraft if owned by Wells Fargo Northwest Trustee, located in Salt Lake City, Utah. In Costa Rica it is operated by Aires de Pavas S.A, whose president is Alberto Esquivel Volio. 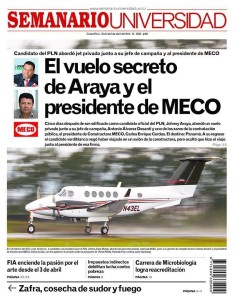 Volio told the Semanario that Araya has made several flights in the jet and that the cost of the flight with Cerdas and Desanti was donated by he and his brothers to the Partido Liberación Nacional (PLN).

“The flight may have cost between US$5.000 and US$6.000 dollars, when Don Johnny Araya has flown on that plane, which was part of a voluntary donation to the PLN party. It’s a donation on the part of my staff, myself and my brothers”, Volio told the Semanario.

The Semanario did not stop there. They consulted Aerobell, a major operator of small planes, jets and helicopters at the Pavas airport, confirming that such a trip by Araya and company would normally cost about US$9.200 dollars.

When the Semanario asked Araya why he did not make his trip on the private jetp with Cerdas public, he replied, “no one asked”.

Desanti, who was elected legislator in the February 2, 2014 elections, admitted boarding the flight with Cerdas, noting that he was invited on the trip by Araya. The legislator-elect said the two (he and Araya) stayed at the same hotel and then met with Cerdas at the stadium the following day.

Coincidentally, the Semanario found that immigration records indicate Desanti checking out of Costa Rica at 6:58am, and Cerdas 4 minutes later, on May 17, again at the Pavas airport and boarding a private flight.

Both Desanti and Cerdas told the Semanario that, despite the coincidence of day and time, they did not fly together.

Desanti says he flew with Prestige Wings, with his daughter Adriana and his security chief, Asdrúbal Calderón. “We went to David (Panama) to meet with the Congreso Indigena”, said Desanti.

The MECO president, meanwhile, said it was just a coincidence. “Antonio Alavarez has not travelled on my plane to Panama. Even if he had, it would not look bad, but it was not like that”,  Cerdas told the Semanario.

The Semanario made another interesting point, another coincidence: the PLN campaign manager and the road construction mogul, both returned from their travels that same day.

According to immigration records, Desanti arrived in Costa Rica, checking at the Pavas airport at 4:21pm, while Cerdas checked in at the Daniel Oduber airport in Liberia at 6:27pm. Both arrived on a private plane.

QCOSTARICA - No doubt, vaccines are one of the most powerful tools to maintain control of Covid-19, but when it comes to entire populations,...
Tourism