Are the Knights Templar Mexico’s Third Most Powerful Cartel? 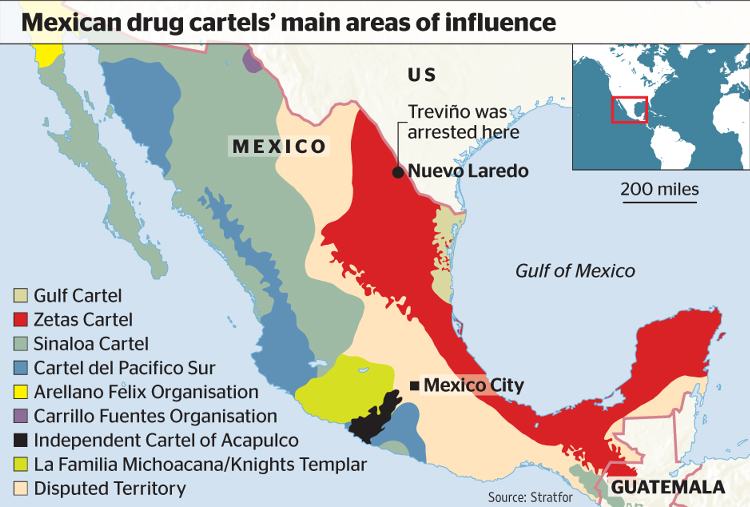 From its origins as a breakaway faction of the battered La Familia Michoacana, the quirky Knights Templar of the Pacific coast state of Michoacan have emerged as the third most prominent of Mexico’s criminal syndicates.

At least, that’s according to press reports supposedly based on intelligence documents of the federal police.

The report ranks the Knights behind the Sinaloa Cartel, nominally led by Joaquin “El Chapo” Guzman, and the Zetas gang whose leader Miguel Angel Treviño, alias “Z40,” was arrested by Mexican marines on July 15.

Knights Templar in Costa Rica: According to the Costa Rica’s Judicial authorities, Knights Templar, bring in the drug from Colombia to Costa Rica and then send it to Mexico. The organization, which controls the drug trade on the Pacific coast of Mexico is known for its violence and engage in criminal activities such as kidnapping, extortion and theft.

The Knights now operate in 10 of Mexico’s 32 states, according to the report, compared with only four several years ago. In comparison, the Zetas’ are active in 21 states, and the Sinaloa Cartel in 19. Lagging much further behind is the Gulf Cartel, with presence in five states, and the Arellano Felix Organization — also known as the Tijuana Cartel –, which is now basically confined to Baja California and a small part of Sonora. 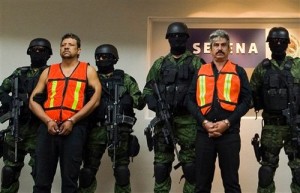 The Knights Templar, or Caballeros Templarios, gang was formed by lieutenants of La Familia founder and spiritual guide Nazario “Craziest One” Moreno following his reported killing at the hands of federal police in December 2010.

Guided by a code of ethics that punishes gang deserters with death, the Knights have largely pushed other La Familia factions out of Michoacan and expanded into neighboring Guanajuato and Mexico states, including the teeming working class suburbs of Mexico City.

The federal police report also has the gang operating in the states of Jalisco, Colima, Nayarit, Guerrero and Guanajuato — all close to Michoacan — as well as Baja California in the far northwest, Tamaulipas in the northeast and southernmost Chiapas.

Of course, size matters when it comes to criminal organizations but these measurements are subjective at best.

Tallying a gang’s zones of operation seems a less accurate yardstick than the number of gunmen it can mobilize or the actual control it wields in communities where it is present.

A security analyst in Michoacan, who has tracked the fortunes of the local gangs for years, told InSight Crime that the Knights have about 600 armed members, with thousands more civilian supporters sprinkled across most of the state. A growing number of communities in the state’s Tierra Caliente, or Hot Land, have formed militias to drive the gang out.

Knights Templar cells have also battled with those of the Zetas, La Familia and other gangs in the adjoining areas of Guanajuato, Guerrero and Mexico state, notably in the Mexican capital’s suburbs. But the gang’s level of penetration elsewhere is uncertain.

As one of the principal producers of Mexican methamphetamine exported to the United States, the Knights need to operate in border states like Baja California and Tamaulipas. And they might be in Chiapas to handle the trafficking of precursor chemicals brought in from Asia through Central America.

In comparison, the tentacles of both the Sinaloa Cartel and the Zetas’ have burrowed deep into many communities across Mexico. El Chapo Guzman’s minions have a truly international reach, while the Zetas dominate along much of the Gulf Coast, in western Zacatecas and into Central America.

San Jose, June 28. – Police in Costa Rica captured two suspected Mexican cartel members Knights Templar and seven Costa Ricans who were his accomplices in the country. The murder of a Guatemalan and Costa Rican model last November by a reckoning was the event that triggered the investigation against Mexicans and his group in the Central American country.

Still, the Knight’s creed, loosely based on that of the medieval Christian crusaders they are named after, has transformed them from mobsters into a social movement, at least in their own eyes.

“We do a lot of illegal things but there are things you can do and things you can’t do,” said former school teacher and Knights leader Servando “La Tuta” Gomez in a wide ranging interview posted on YouTube over the weekend (see below). “We can’t bother the public or the working people. We believe, and we have the concept clear, that we are servants. We want there to be work, education and health.”

In comparison with the other large gangs, whose factions frequently fragment into bloody feuding, the Knights so far seem to be holding together. That’s likely due in part to the death penalties for disloyalty and disobedience spelled out in the gang’s 50-point Code of Ethics.

The code opens with the warning that any who join the Knights do so for life, no exceptions.

Regardless of their true national reach this summer the Knights have become one of President Enrique Peña Nieto’s biggest headaches as he struggles to reign in Mexico’s security crisis.

However, the Knights now face serious challenges, and not just from the authorities. In the latest YouTube video La Tuta accuses the federal police of collaborating with the militias that have formed in a number of Michoacan communities to confront his gang. Warning of violence to come, the Knights boss says the militias are linked to the Zetas and the Jalisco Cartel – New Generation, the Knights’ principal enemies.

“The fundamental problem here is that which is happening with the comunitarios,” La Tuta said, referring to the militias. “I assure you that the majority, 80 percent, of the comunitarios are criminals. This is a criminal group against criminals.”

The Knights so far have proved resilient in the face of the government’s campaign against them and have showed themselves willing to take the fight to the vigilante militias. But with Peña Nieto’s public security reputation now pegged to destroying them, and the Michoacan self-defense groups continuing to grow, in the coming months the Knights may well be whittled to a sliver of what they are now.