Are Tourists In Costa Rica Getting Screwed Over? You Decide!

Costa Rica, characterized as a jewel for tourism, last year alone visited by more than 2 million tourists, half of which were Americans, can you imagine the bitter experience by some paying more than US$120 (¢70,000 colones) for a bottle of Cacique? Or Agua Ardiente?

That is the case at the Jaco Blu bar/restaurant in the popular tourist destination of Playa Jaco, according to the Ticoblogger, El Chamuko on the website, El Infierno en Costa Rica , a website dedicated to exposing the absurdities in the country and the accompanying Facebook page, that published the price list.

Yes, liquor and beer is usually more expensive at a bar or restaurant than at the local supermarket or liquor store. But to gouge customers?

Cacique Guaro is a sugar cane liquor of high purity and is the best selling distilled spirit in Costa Rica. Aguardiente is a generic term for alcoholic beverages that contain between 29% and 60% alcohol by volume.

The word Aguardiente is a compound of the words for “water” (agua in Spanish) and “fiery” (ardiente in Spanish). The English term is “firewater”. 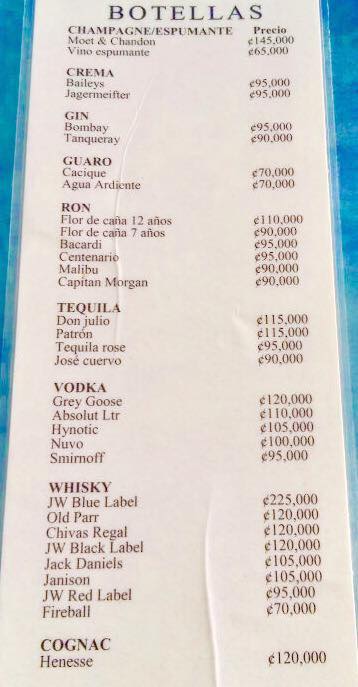 Reporter Ronny López said he was able to connect to “Enrique”, the bar/restaurant’s social network manager, who declined to give his full identity, who said the owners will be meeting to clarify the situation. The journalist wrote the Enrique threw the phone at him when he pressed about the high prices for tourists.

- Advertisement -
Paying the bills
Previous articleMTSS Says It Never Authorized Use of Logo On Stop Human Trafficking Advertising
Next articleTrain of Idiots!

QCOSTARICA - This is not a joke. The shelves of some...
Read more

QCOSTARICA - The heavy rains that have been reported in recent...
Read more