U.S. President Barak Obama and former Costa Rican President Oscar Arias have much in common. Both are winners of the Nobel Peace Prize and, as such have been critical of war as foreign policy and as a solution for problems. 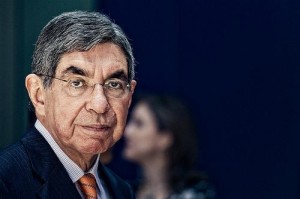 So why is Arias taking Obama to task without mincing words? Arias reacted on Facebook  (comments below) Thursday to President Obama’s speech promising armed retaliation against the Syrian regime of Bashar Al-Assad. Five cruise missile destroyers are now in the eastern Mediterranean as are two U.S. submarines.

Friday’s statements by Secretary of State John Kerry and Vice President Joe Biden left no doubt that this time the three most powerful leaders of the United States had no doubts about intelligence and that Assad had used poison gas against his own populace.

This was the “red line” Obama had demanded that Assad not cross, that would cause the reluctant President to order retaliation. For about a year, the press has reported about 35 small gas attacks, charged by reliable sources, but they were not confirmed.

But Thursday, President Arias blasted Obama like this: “It appears that the United States has not learned from its errors in the past: The unilateral invasion of Iraq that President George W. Bush embarked on was an enormous error and was repudiated by an immense majority of governments in the world.”

Ironically, this could have been the words spoken by Obama when he was in the Senate and an opponent of the Bush foreign policy. He had always been suspicious of the intelligence reports that said Iraq’s Saddam Hussein was building and storing weapons of mass destruction. After the invasion, none were found, of course.

But Arias does not even mention intelligence, accurate or flawed. Instead, he was targeting collateral damage. “To bomb Syria from warships in the Mediterranean implies the deaths of hundreds or thousands of innocent men, women and children,” Arias thundered.

Arias considers it “inconceivable that President Obama, a Nobel Peace Prize winner, is disposed to follow in the footsteps of ex-President Bush.” Arias made it clear that he is no admirer of Assad who runs a “dictatorial and criminal” government.

The Costa Rican expressed deep disappointment in Obama: “I was confident that, with the failure of the ‘preponente’ invasion of Iraq, that the White House would back multilateralism in the future to confront despotic and bloody regimes.”

Since Obama promised a “limited action” against Assad and no prolonged military action nor “boots on the ground,” Aria noted that this would not bring down the regime and so “was not the best path to choose.”

But the U.S. President has been measured in his responses — and has received much pressure to act more quickly and decisively by Sen. John McCain, among others. “How is it that no one is thinking of a negotiated an exit to the Syrian conflict that would lead to free elections in the shortest time possible as we did in Central America in 1987 with the signing of my peace plan?” he asks.

However much this blog would like to agree with Arias whose success is not to be denied, the Middle East is not Central America during the Cold War. At that time, Arias had the backing of presidents who knew that their countries could not continue with constant civil wars.

Instead, Assad has made it clear that he will remain in power if he has to kill every Syrian in his country. We must remember that Middle Eastern despots think of their countries much as we think of the house and lot that we own. Each is under the illusion of permanence.

Nor is Obama, the reluctant warrior, George W. Bush. He engineered a way out of Iraq and, although that country may be headed to the abyss, he is under no illusions of building republics. Nor is he bent on seeking every pretext to invade.

To this day, many on the left in the United States feel that the Bush Administration lied to them about weapons of mass destruction and stampeded Congress. We at this blog suspect that instead, with Bush and his cabinet hell-bent on invasion, the intelligence community skewed their findings to please the boss.

A much different climate exists in Washington D.C. today. Rather, Assad by his ruthless miscalculation, has pushed a U.S. President against the wall. Negotiations take two to tango and Assad is not dancing.

It is true that approval of Obama’s retaliation is not coming from the United Nations, blocked in the Security Council by Russia’s veto power. Nor is NATO on board, nor the Arab League and stunningly, the British Parliament voted down a proposal to intervene. The only important national in Europe that is with him is France.

We are sorry, Sr. Arias, but the lessons of the Peace Plan are not applicable to today’s dangerous Middle East. Sometimes peace cannot be negotiated.

HQ - The Fuerza Publica (National Pollice) intervened an agglomeration of people on the outskirts of the Rincón Grande de Pavas school during the...
Economic Recovery

QCOSTARICA - It's five in the afternoon on any given Wednesday in San José. Hundreds of people returning to their homes begin to crowd...
Redaqted

The small Central American country of Costa Rica is known to be one of the top locations to retire, but it is also known...
Nicaragua