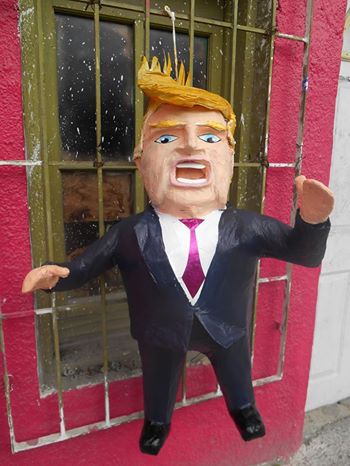 (QCOSTARICA Via Fox News Latino) Mexico City – After Donald Trump’s Mexico-bashing comments this week, Mexicans are engaging in a little Trump-bashing of their own.

Artesan Dalton Avalos Ramirez created a Trump piñata after the outspoken mogul bashed Mexico on Tuesday during a speech when he announced he was running for president. During his kickoff speech, Trump accused Mexico of illegally sending drugs, crime and rapists across the border.

Avalos Ramirez, who lives and works in Reynosa, Mexico said Mexicans on both sides of the border are quite angry at his comments and are embracing the new piñata gladly.

He has sold five piñatas since he put out the first one on Wednesday, he said. He has also in talks for a bulk order of 50 Donald Trump piñatas for a customer based in McAllen, Texas.

“It’s something metaphoric, people bashing him for the comments he made,” he told Fox News Latino over the phone.

“We thought [Trump’s comments] were very wrong because we are a working country, we go to the United States to work, but unfortunately we face a lot of racism,” he added.

The Piñatería Ramirez, with more than 30 years in the business, gained some fame in the past few months with their Kim Kardashian piñata, made in the image of the reality star posing naked with a champagne glass on her buttocks.

“Lately we like making piñatas that are more trendy,” he told FNL back in December, when the Kardashian figure became a hit.

The Associated Press contributed to this report.