As Venezuela Falters, So Too Will Nicaragua 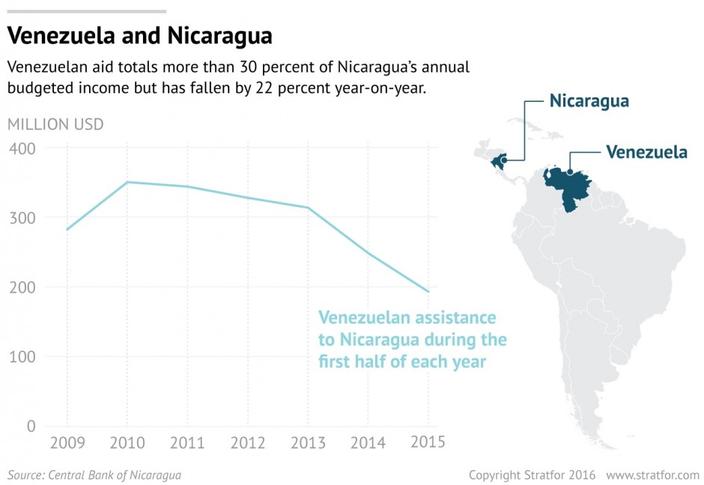 TODAY NICARAGUA – Political change comes slowly to Nicaragua. Nearly 27 years ago, the country’s civil war ended with a truce between the U.S.-supported Contra movement and the Soviet-backed government of Nicaragua.

Even decades after a 1990 settlement that called for presidential elections every five years, the commitment to regular political transition has not appreciably altered the underlying drivers or key actors in Nicaraguan politics.

The Sandinista National Liberation Front — named for the main resistance leader against U.S. forces, Augusto Sandino — ruled from the 1979 revolution to 1991.

It has again become the dominant party, countered only by a weak opposition. Modern-day Nicaragua, run by President Daniel Ortega, is one of the last self-described leftist states in Latin America that is not facing an existential threat from shifting voter sentiment or economic turmoil.

But Nicaragua’s populist politics could be challenged in the next several years because of Ortega’s advancing age and the country’s tapering economic assistance from Venezuela, the single largest source of government social spending. Oil shipments are a crucial part of that assistance and have already been significantly reduced. In the coming years, economic challenges will help the opposition make gains.

To understand how the Sandinistas came to hold such power in Nicaragua, it helps to know some modern Nicaraguan history. Defined as the frequent transfer of power from one party to another, democratic rule is a relatively new concept in Nicaragua.

Ever since the country secured its independence in the 19th century, Nicaraguan politics have been typified by violent overthrows of presidents and decadeslong struggles between major factions, including the Liberals and Conservatives.

Furthermore, its geographic proximity to the U.S. often brought its political violence under the eyes of Washington, driving the United States to intervene to preserve its own political and economic interests as well as those of Nicaragua.

It was Washington’s military intervention in 1926 following a conflict between Liberals and Conservatives — compounded by the reactionary forces it fomented — that led to the swift rise of the Sandinistas.

More than a hundred years after the first major U.S. intervention and 35 years after the Sandinistas first came to power, Nicaragua is now again facing the possibility of major political change.

This time, the catalyzing agent is not a U.S. intervention or a domestic insurgency, but rather the faltering economies in Venezuela and across Latin America and the Caribbean.