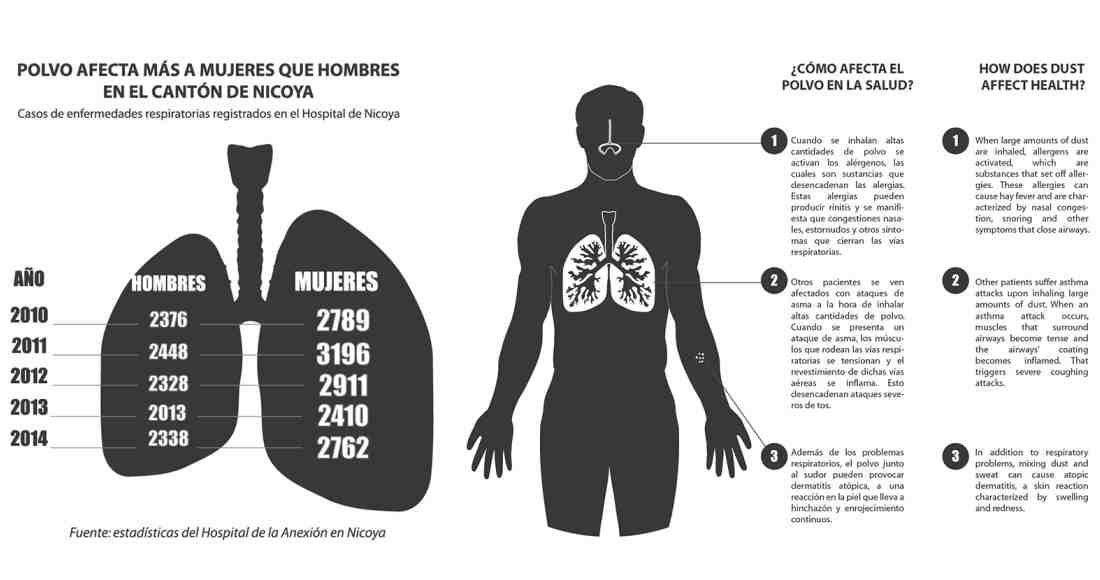 COSTA RICA NEWS – By Wilberth Villalobos Castrillo, Voz de Guanacaste – A study done by the Voice of Guanacaste of respiratory sickness statistics for the Nicoya canton, based on reports from the last five years from La Anexion Hospital and the EBAIS in Nosara, shows a 64% reduction in cases of illnesses that afflict respiratory airways in the community of Nosara. 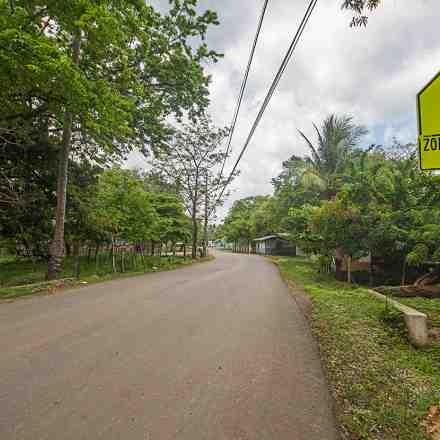 According to data provided by Ministry of Health authorities for the Nicoya region, statistics from the EBAIS in Nosara show 187 registered consultations for respiratory illnesses during the first trimester of 2013— January, February and March. In the same period for 2014, only 67 cases were registered, meaning that the health center attended to 120 less patients than the previous year.

A probable explanation for the drop in cases of dust-related sickness lies in the partial application of asphalt that the Ministry of Public Works and Transportation (MOPT – Ministerio de Obras Públicas y Transportes) did along route 160 from San Fernando to Nosara.

The asphalt was laid in March of 2013, just after the end of the dusty season in Guanacaste when respiratory illnesses tend to occur with greater frequency among the canton’s residents due to high temperatures and the excess of dust particles in the air.

The asphalt was laid along parts of the road with the highest concentration of homes and people in communities like San Fernando, Barco Quebrado and Garza.

Women More Affected by Dust
Another trend demonstrated by statistics from La Anexion Hospital in Nicoya is that the majority of those suffering from dust-related sickness during the first three months of the year are women.

The reason women are more affected than men is not due to physical or genetic factors; rather it is because women spend more time exposed to dust.

According to Dr. Sofia Soto, from the epidemiologic surveillance department at the hospital of Nicoya, women spend more time in the home cleaning up dust and doing other chores that bring them into direct contact with dust while men are out working.

According to data from the epidemiologic surveillance department of La Anexion Hospital, the most frequent cases seen at the hospital are asthma, hay fever and allergic conjunctivitis, flu, rotavirus and influenza (see How Does Dust Affect Health? graphic).

Appeal Moves Forward
Even though Marcos Avila, president of the Nosara Integral Development Association (ADIN – Asociación de Desarrollo Integral de Nosara), believes that the dust mitigation work on route 160 was not the best, he is certain that the project had a positive impact on people´s health and even the communities’ appearance.

“I believe that [the work] did have a positive effect because the dust doesn’t come up as bad as before, mainly where there more houses, and communities such as Garza even look cleaner,” Avila pointed out.

But that does not mean that ADIN or the Nosara Civic Association (NCA) will let up in the fight to reduce the dust’s impact on health. Both organizations are planning legal action against MOPT and the National Roadways Council (CONAVI – Consejo Nacional de Vialidad), demanding they pave route 160.

Avila explained that they presented an appeal against Carlos Segnini, the current MOPT chief, during the final week of May. The appeal includes information on route 160, as well as the justification for the project and the repeated unfulfilled promises that previous government officials have made.

Andrea Pignataro, a lawyer contracted by NCA who specializes in civil and commercial law, reported that they are conducting a legal study of the health data, as well as collecting testimonial evidence from residents of Nosara, to find out how the dust is affecting their bodies.

Pignataro said that they will first exhaust all possible means of dialogue with the new government authorities, in order to understand their stance, and if they don´t receive a favorable response, they will begin to pursue legal action against CONAVI.

“I believe that the first thing is to see what evidence we have and in that way support our case. I would exhaust the possibility of talking, so as to complete one step and eliminate one route, keeping in mind that it’s a new government. If not, we’ll take the legal route,” Pignataro stated.

ADIN and NCA both based their appeal on the basic right to health of the people who live and travel on route 160.

Cristian Fallas, an engineer for CONAVI, reported that a bid request is being processed to do maintenance work on the gravel on route 160.

The work would involve the section of road from Rio Montaña in Nosara to the intersection at the gas station in Samara. In addition, Fallas said that they will be cleaning ditches and re-laying gravel material on the road.

Regarding the stretches covered in asphalt by MOPT’s machinery in 2013, Fallas assured that they will not remove it. Instead, the gravel will be spread on the rest of the road.

The route’s maintenance project is in process by CONAVI’s Contracting Management, and Fallas did not wish to give an exact starting date for the work nor its projected duration, as it is still being planned. However, he emphasized that it does exist and is moving forward.

How does dust affect health?
When large amounts of dust are inhaled, allergens are activated, which are substances that set off allergies. These allergies can cause hay fever and are characterized by nasal congestion, snoring and other symptoms that close airways.

In addition to respiratory problems, mixing dust and sweat can cause atopic dermatitis, a skin reaction characterized by swelling and redness.

- Advertisement -
Paying the bills
Previous articleCan’t Surf? Not a Problem in Nosara!
Next article7 Ways to Spend as Much Money as Possible in Costa Rica