Banana chips consolidate in the U.S. and Caribbean

Being a rare snack outside the borders of Costa Rica, plantain or banana chips managed to maintain an export growth in 2012, mainly in the U.S. and Caribbean markets. 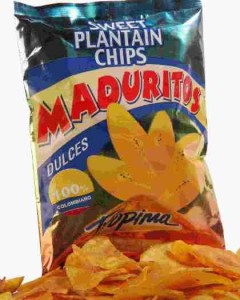 The revenues generated by this product grew by 88% last year compared to 2011, after reaching the figure of $ 13.4 million, according to data from the Foreign Trade Promoter (Procomer).

Peak shipments went to Jamaica, which doubled the amount and represent almost 40% of these exports since 2011.

Other markets that have also increased their demand are the U.S. (67%) and Trinidad and Tobago (170%).

Leonel Zúñiga, CEO of Zúñiga Food, said that in their case increases were due to exports to U.S. which began in April 2012, seven containers were sent through an intermediary that places them in supermarket chains located in Miami.

This year the plan is to consolidate Miami and move into Puerto Rico.

Another company that produces and exports these chips is Alimentos Bermúdez, which started its production in Sarapiqui in 2010 and has its headquarters in Trinidad and Tobago, which has allowed them to exploit the Caribbean market.

Pozuelo and Pro Group are also included in this business. They have already established markets for plantain chips in Guatemala, Panama and Nicaragua and parts of Italy, but plan to expand their presence in Honduras, El Salvador and the Dominican Republic.

EXPAT FOCUS (MND) Of course it was no surprise that readers of Mexico News Daily voted Mexico as the No. 1 expat destination in...
News

QCOSTARICA - The pandemic caused by Covid-19 fuels the strategy of positioning Costa Rica as a world destination to develop wellness tourism, since travelers...
Vaccine