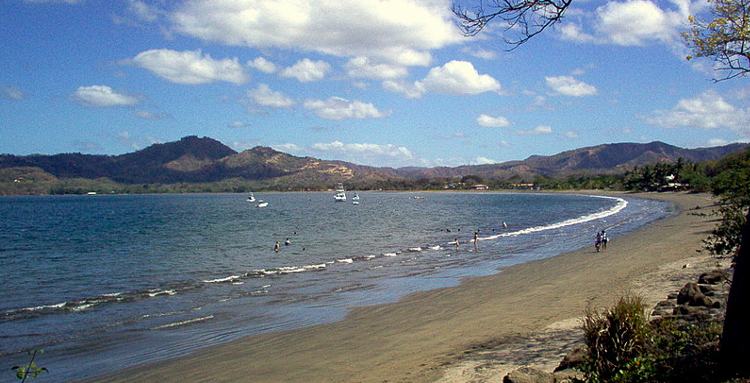 Moving from New York City to a small town in the U.S. is quite a culture shock on its own. But Rick Macsherry, 60, and Christina Spilsbury, 58, did one better. In 1989, they moved to a small fishing village on Costa Rica‘s northern Pacific coast.

Back then, Tamarindo was tiny and remote, accessible only by a bumpy dirt road that fronted the beach.

“When we moved here, there were only about 50 people, locals and expats,” recalls Christina.

The only foreign visitors were sport fishermen (Tamarindo remains a fishing destination today), pioneering surfers in search of consistently good waves, and a handful of adventurous tourists who stayed at the few small hotels in town. Ticos, as Costa Ricans call themselves, flooded the area between Christmas and Semana Santa, or Holy Week, as they still do today.

But otherwise, Tamarindo was a very quiet place.

Today, it’s a tourist destination and busy little town full of expats of various nationalities—from Italian to Argentinian to Israeli to Canadian. There are restaurants, from take-away to sit-down gourmet of every cuisine. Grocery stores are packed with imported items like hummus and frozen waffles.

But it still manages to retain a funky, laid-back character. It’s a beach town through and through. Where sunset drinks on the beach are the only unmissable appointment on your calendar. And while there might be plenty of tourists walking the streets and laying out on the beach during high season, the town’s long-term residents remain close-knit.

Christina’s grandmother was from Costa Rica, and she had family in San Jose, the country’s capital. So the couple had visited the country before and traveled around extensively. The funny thing is despite their obvious affinity for the place the couple never intended to move here permanently.

But then Christina, a writer, was offered a grant to work on her next project. Knowing the money would be enough to support themselves for a while in Costa Rica, they headed south. And during that year-long stint in Tamarindo, they fell in love with the place. After a short trip back to New York, they moved back to their new home.

Location was a big factor: “I love the beach,” says Christina.

But so was lifestyle.

“We really thought the thing that’s most valuable in life is time,” explains Christina. “We definitely pace ourselves so we have time to enjoy the place we live. And we have a lot of friends. Here there’s time to make friends…and plenty of public space like the beach to meet people.”

Christina and Rick have seen a lot of changes over the years.

Cost of living in Costa Rica, for one, has increased since the 1980s. But…

“We can still afford to have a gardener and a cleaning woman, something we couldn’t afford in the States,” says Christina.

Plus, health care is cheap. The couple feels blessed not to have had any serious medical issues over the years. But they do report that their local dentist charges a fifth of what it would cost in the U.S. for treatment.

These days Rick and Christina keep busy with their catering business, based in Playa Langosta, just south of Tamarindo. The area has become a destination for weddings and large family reunions over the years, according to Christina, and Sunset Catering serves that need. But they still make time for what’s really important.

“We walk the beach and swim every day,” says Christina. “And at the end of the day we always watch the sunset.”