After reading the title you are probably asking, “What does encelulado mean in English.” The closest translation I can come up with is “to connected one’s cell phone frequently or almost continuously.” 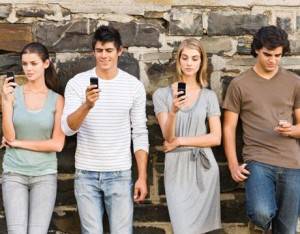 Everywhere you go in Costa Rica you’ll see people who are walking around with a cell phone in their hand. Whenever I take the bus I notice the first thing most of the passengers do after siting down is whip out their mobile phone. Everyone seems to be connected to their phones much like having an umbilical cord. If they are not texting they are talking, surfing the web or listening to music.

It seems that it is almost impossible for some people to disconnect themselves from their cell phones. “Cellulitis” is a skin disease but it seems like a good word for describing people who are connected incessantly. I must admit that I am guilty of listening to music on my phone so I don’t get bored when I travel by the bus. It also makes the trip seem shorter. I own two cars but usually take the bus from Heredia to San José to avoid getting stressed out by driving in heavy traffic.

According to recent studies by the telephone providers Claro and Movistar, people in Costa Rica are connected more to the Internet and consume more data than any other country in Central America. In fact, they use more data than El Salvador, Panama and Nicaragua together. Fifty percent of the two company’s clients have smart phones; Eighty percent use the Internet; and fifteen percent use social networks like Facebook and twitter.

According to the statistics there are 5.3 million cell phones in Costa Rica or 119 phones per 100 people. Some here communicate more with their families, who they live with, by cell phone than in person. Those who live “encelulados” can suffer the consequences like stress, bad moods, digestive problems, injury to fingers from overuse and irregular sleeping habits. Local psychologists recommend that people limit the use of their phones so as not to suffer from any of the maladies above. People with children who have phones should particularly be aware of the downside of using these devices constantly. Many expats and retirees are also guilty of using these devices in excess.