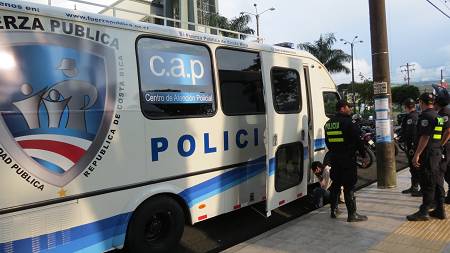 It appears that not even a well marked police vehicle is out of reach of the criminals in Costa Rica.

]As the story goes, it was Saturday afternoon that a group of police officers of the Fuerza Pública travelled to Puntarenas to take part in the “Carrera del Médico”, organized by the College of Physicians.

The group of officials were travelling in a Fuerza Pública minibus, parking it on the Paseo de los Turistas, the main tourist drag by the ocean in Pearl of the Pacific (Puntarenas).

When the officers returned to their vehicle, they noticed  it had been broken into (tachado in Spanish). Gone were their valuables that included cellular phones and wallets.

Because the event was not a police operation, the officers did not carry their weapons, badges and uniforms, according to an official press release by the Ministerio de Segurida Pública (MSP).

The MSP press release said that An intense police operation was undertaken in the area to find the person or persons responsible. But they came up empty handed.

TODAY NICARAGUA – Despite international pressure and rejection, Nicaragua President Daniel Ortega continues to imprison Nicaraguans who criticize and question the way he is...
Nicaragua