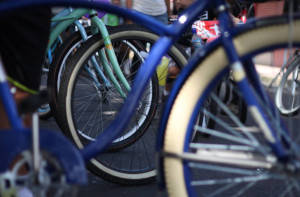 What is a Monchocleteada? Moncho is the nickname for Ramón in Spanish and also the city of San Ramón. Cleteada is slang for a bicycle ride in Costa Rican Spanish. So, this new term basically means “a bike ride through the town of San Ramón.”

On Sunday December 1, 2013 two bike rides will take place in the city. One will be a slow-paced ride around town while the other will be for more experienced cyclists or cletos. Both rides are part of a project sponsored by an organization that promotes cultural events called “Avenida Cultural.” The goal is for San Ramón to become a town that foments cultural and recreational events and local handicrafts.

The bike ride is designed to encourage cycling as a viable form of transportation in urban areas. The organizers also want people to be aware this environmental friendly form of transportation as way to improve one’s health and reduce stress. The first Monochocleateada was actually held about a month ago on November 17th. People of all ages participated and a 77-year old man was honored. The latter began a trip by bike on the same day from San Ramón to the port city of Puntarenas as a special tribute to veterans who participated in Costa Rica’s last military campaign of 1948, just before the country’s army was abolished.

The bike ride will begin at 9am in front of the town’s city hall. There will also be a wide range of family oriented activities which include live music, dancing, storytelling and more.

Actually, I have a Central Valley relocation tour scheduled the same day where we visit San Ramón. I will make sure that my guests have a chance to experience some of the aforementioned activities.

NOTE: San Ramón is fast becoming a magnet for retirees and other expats. The event I have described is just one of the many activities this charming little city has to offer for people who relocate there.