LATIN AMERICA NEWS  — Coca growers in Bolivia have expressed support for the government’s plan to tax the production of coca leaves, but the measure could potentially end up pushing more coca into the illegal drug market, where growers can make a larger profit. 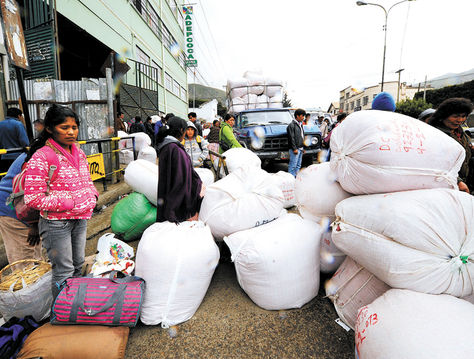 Coca growers in Cochabamba and Yungas de La Paz, where the plant may be grown legally in Boliva, have stated that they are open to paying taxes on coca production, reported La Razon. According to Vice Minister of Defense Felipe Caceres, the tax rate has yet to be determined and will be decided in future meetings with coca producers. However, La Razon indicated that it will likely fall between 29 and 73 cents for every 50-pound bag of coca leaves.

Caceres said the government would modify its coca regulation law to include the tax, and that the collected revenue would be used to fund the fight against drug trafficking. He also stated that the government would host a national congress to redetermine the number of hectares of coca that can be legally cultivated in Bolivia (currently capped at 12,000 hectares).

Although the proposed tax could help fund interdiction efforts, it may have an unintended side effect: increasing the amount of legal coca that ends up in the illegal market. Drug traffickers already offer coca growers a higher price for their product. A tax on legally produced coca leaves may create an additional economic incentive for growers to sell their wares to the illegal drug trade.

The country currently allows 12,000 hectares to be grown legally for traditional uses, but the government has proposed increasing that figure to 20,000. However, according to a goverment survey on coca use released in 2013, only 14,705 hectares are needed to satisfy current legal demand for the plant. The UNODC’s most recent report determined that Bolivia grew a total of 23,000 hectares of coca last year, which translates to over 8,000 hectares more than the amount needed to satisfy legal demand.

Coca growers have a great deal of political clout in Bolivia, and their support for the plans to tax coca will prove crucial if the policy is to move forward. If the coca growers withdraw their support, then the tax could prove politically costly without generating much tax revenue. Based on the amount of coca leaves sold on the legal market in 2012 and the proposed tax rate, taxes would only end up generating between $220,000 and $560,000 a year.