TODAY NICARAUGA NEWS (Prensa Latina) — Companies from Russia are interested in participating in the construction of canal building project that would connect the Pacific and Atlantic via Nicaragua, said today the adviser for Nicaragua”s Investment Promotion Agency, Laureano Ortega. 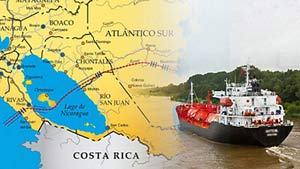 These companies seek to talk with China’s HKND, licensee of the work that will start in December to get further information about the project and to know how they can participate in tenders, according to Ortega.

Russia has great capacity building companies and if they were able to find a space in the project would be important to Nicaragua, Ortega said in a statement to the television.

He added that Dutch, German, and French companies are also interested in joining the project.

The construction of the 278-km canal, from the mouth of the Brito River on the Pacific side to the Punto Gorda River on the Caribbean side, will likely cost US$50 billion. The project is being funded by HK Nicaragua Canal Development Investment Company (HKND Group).

Today, Monday, June 21, we are back to the two plates that cannot circulate, in today's case plates ending in 1 & 2 CANNOT...
Corrupion

QCOSTARICA - No more soup for you! If the Minister of Public Works and Transport (MOPT), Rodolfo Méndez, has his way, the H. Solís...
Crime

QCOSTARICA - Ever wonder why your surfing on the Internet slows down, to even a crawl, mainly in the evenings? This is due to...
Economy

QCOSTARICA - Strengthen the attraction of Costa Rica to attract high-tech, innovative, and science companies to invest, is an initiative that stands out in...
Economic Recovery