(Reuters) – Costa Rica’s Celso Borges will not be fazed by facing some of the best midfielders in the world when his side take on three former world champions in Uruguay, Italy and England at the World Cup in Brazil, next month. 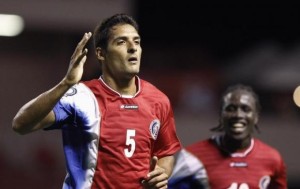 In an interview with Reuters in Stockholm where the 25-year-old midfielder plays his club football for AIK, he also suggested his country (Costa Rica) can shock that trio in Group D.

Having qualified for the World Cup by finishing second to the United States in the final round of the protracted CONCACAF qualifying competition, the step up in quality from the Swedish top flight to the international top flight is not a prospect that holds any fears for the tough-tackling midfielder known for his powerful shooting.

He is looking forward to playing some of the world’s top midfielders like Italy’s Andrea Pirlo and England’s Steven Gerrard.

“I won’t feel intimidated, they’re just the same as me, they just happen to be playing in a better league,” he said of the prospect of facing the pair.

“I don’t think there’s any difference between not only me, but us Costa Ricans and England or Italy – that’s just how the game is.

“Most bookmakers will have Costa Rica coming bottom of the group. I understand it, but I don’t accept it. Once the game starts, if we have a good game plan it’s about strategy and about will.

“We have a lot of individual players that are playing well, we’re a solid team. England, Uruguay and Italy are all former world champions, but after you analyse it everyone has the same chances.”

The tournament will have a little extra spice for Borges who comes from the Costa Rican capital of San Jose. Brazil is his father’s homeland.

His dad Alexandre Guimares is a hugely-respected figure in Costa Rican football, who played for and managed the national team at the World Cup, as well having both roles at leading club Deportivo Saprissa.

“My real hero is my dad,” said Borges, before describing the current state of Costa Rican football as being a blend of Brazilian and European styles.

“Our league is more like Brazil, a bit more freelancing, not so many tactical dispositions. In the national team we’ve managed to build ourselves a little bit like we did in Italy in 2006 – a solid defensive group with very good players in attack.

QCOSTARICA - Faced with wasting a vaccine dose when people in the priority groups scheduled do not show up, and a substitute cannot be...
Latin America

QCOSTARICA - The multipurpose national stadium, the first modern sport and event arena to be built in Central America, located La Sabana. The stadium was...
Quepos

Q REPORTS (DW) In Peru, the left-wing village school teacher Pedro Castillo has in all probability been elected the new president. The fact that...
Guatemala