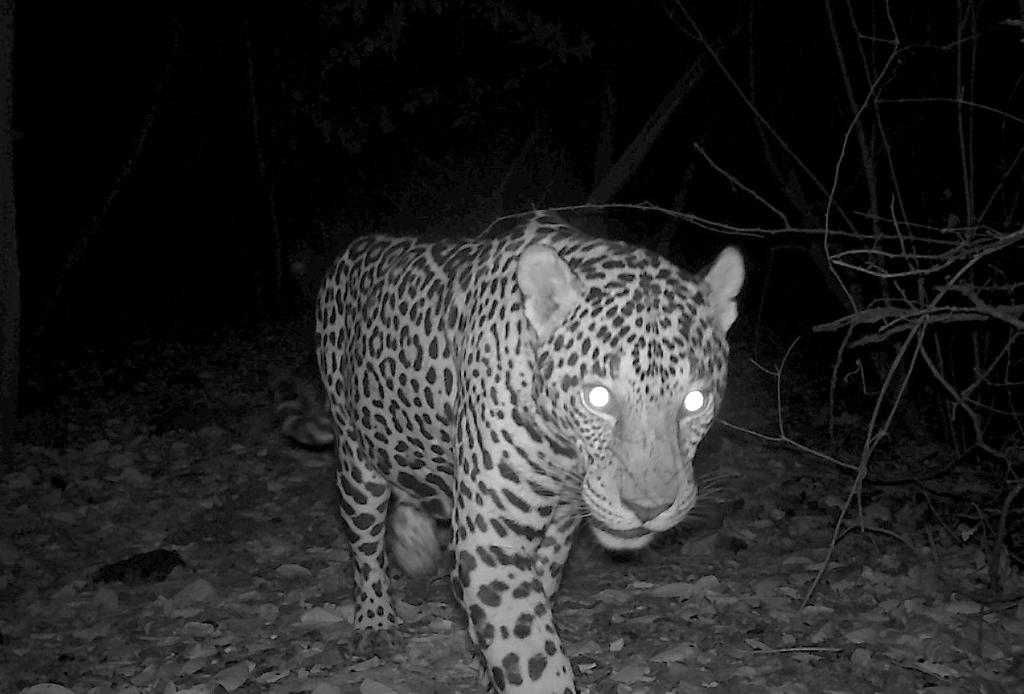 The video reflects the good time that this species of carnivores lives due to several reasons.

The animals appear in two shots: one is near the beach where they usually hunt turtles and then inland, feeding on their prey.

Both had been seen with their mother and, in this case, their kinship was recognized by the pattern of their spots, thanks to which it is possible to trace family relationships in this species.

The photos captures are part of a monitoring and research project on turtles and jaguars in the Santa Rosa National Park, explained Alejandro Masís Cuevillas, director of the ACG attached to the Sistema Nacional de Áreas de Conservación (National System of Conservation Areas).

Jaguars are the largest cats in America and third in the world, after the tiger (Panthera tigris) and the lion (Panthera leo).

They can measure up to two meters and accumulate body masses between 56 and 96 kilograms and can propel at speeds of up to 80 km/h in their pursuit.

Their population is recovering, as they now register a greater presence on the coasts of the protected area where they to prey on turtles, that are easier to catch in the sand and are an abundant food source.

The turtles are almost always caught at night while their eggs are nesting and then carried inland along the beach where they are eaten.

Jaguars use a lot of energy when they chase, kill and then move a large animal, explained Shirley Ramírez Carvajal, a biologist with the National Commission for Biodiversity Management of the Ministry of Environment and Energy.

Depending on the size of the prey, jaguars have food for several days, even when on hunting day they eat in abundance to recover.

“When they are satisfied, they leave the prey in the same place, to which they usually return for several days to continue feeding, since these cats have a very accelerated metabolism (this explains their natural thinness),” said Ramírez.

Masís explained, there are jaguars that come to share the same prey with other animals.

At the level of the food chain in the area, that means a sufficient quantity of food, which lowers the overall pressure for these carnivores who compete for food. That is, there is so much to share.

“At a general level, the jaguar population has been recovering and below these, other species are doing the same. In addition, with the recovery of the dry tropical forest in the Conservation Area, jaguars from the Guanacaste volcanic mountain range and coastal areas are now connecting again,” Masís pointed out.

This represents other good news because the reproduction of the species will increase in the number of individuals and in genetic vigor. In the wild, these big cats can live from 12 to 15 years.

Eduardo Carrillo, researcher and professor at the Universidad Nacional (UNA), estimates that the jaguar population should be around 135 individuals in the ACG and constitutes one of the densest in Central America, according to the academic who has accumulated almost 30 years of studying these animals and their prey.

At present, the jaguar’s range extends from Mexico through Central America to South America, including much of Amazonian Brazil. The countries included in its range are Argentina, Belize, Bolivia, Colombia, Costa Rica, particularly on the Osa Peninsula, Ecuador, French Guiana, Guatemala, Guyana, Honduras, Nicaragua, Panama, Paraguay, Peru, Suriname, the United States and Venezuela.

It is considered to be locally extinct in El Salvador and Uruguay. In 1999, its historic range at the turn of the 20th century was estimated at 19 million km2 (7.3 million sq mi) stretching from the southern United States through Central America to southern Argentina.

By the turn of the 21st century, its global range had decreased to about 8.75 million km2 (3.38 sq mi), most of it in the southern United States, northern Mexico, northern Brazil, and southern Argentina.

Surfing with a Jaguar in Costa Rica

A wild jaguar and a surfer exchange glances at the distance...
Read more

What girl would not want her love story to...
Latin America