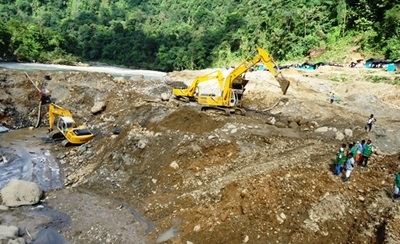 TODAY COLOMBIA (InSightCrime) Colombia has launched a new scheme to undermine illegal mining by controlling the purchase and sale of minerals, which comes amid a still unraveling billion dollar illegal gold export scandal that illustrates the scale of the task authorities face.

Colombia’s National Mining Agency (ANM) has begun a new policy in which all people and companies that want to legally trade in minerals must sign up with the body’s Mineral Sales Registry (Rucom) (pdf).

Since last year, the owners of mining concessions have been obligated to register. By now including mineral traders, Colombia’s anti-mining authorities are hoping to increase their capacity to trace illegal gold as it enters the legal market, rather than just at the point of extraction.

The head of the ANM, Natalia Gutierrez, told El Tiempo the new measure was targeting the illegal gold industry, and that any gold traders not on the list would not be able to buy or sell gold, and would risk police investigation and the confiscation of their merchandise.

The recently revealed Goldex scandal, which saw one of Colombia’s biggest gold exporters accused of using gold sales to launder over $1 billion, has provided a clear demonstration of the urgency of tightening up restrictions on gold sales by legally constituted businesses.

In the past, there was little oversight of this point of contact between illegal mining operations and legal gold exporters and traders, and this has been a critical factor in facilitating the unchecked growth of illegal gold mining in Colombia in recent years.

However, the Goldex case also illustrates the size of the task facing authorities as they try to rein in a billion dollar industry, the tentacles of which reach everywhere from Marxist guerrillas to global commodity markets. According to the ANM’s figures, as much as 83 percent of the gold and silver produced in Colombia originates from illegal or informal mines, and it will likely take more than a registry to tip the scale back towards legality.

If this is to happen, Colombia must take action not only against criminal mining operations, but also to bring informal miners into the formal economy. The government has launched formalization programs in the past, but miners say they have consistently failed to deliver on a substantial scale.

QCOSTARICA - Costa Rica's economic activity registered in April 2021 a year-on-year growth of 8.8%, a figure affected by a “base” or “rebound” effect,...
Cine (Movies)

QCOSTARICA -  In yet another system-wide failure in the immigration check-out, passengers looking to leave Costa Rica Monday morning by way of the Juan...
Turrialba