Miss Colombia Rules Them All! 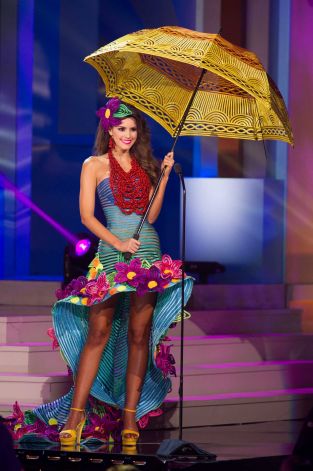 Vega, a 22-year-old student of business administration from Barranquilla, Colombia, said she would wear the crown with “pride and excitement” as she heard the news that fans in Colombia had taken to the streets to celebrate.

Although she was far from home, Vega said she still felt the support from local Latinos.

“It felt like home. I felt like I was in Colombia with my people. I felt that support in every moment of the pageant,” she said, wearing a sparkling silver gown with vertical stripes at a press conference after the competition.

Real estate mogul and reality TV star Donald Trump, who owns the pageant, said many predicted Vega would take the crown a few weeks ago when contestants first arrived in Miami for the festivities.

“From the minute she walked in the building, people said, ‘She’s a star,'” Trump said.

Trump said Colombia was in the running to host next year’s pageant but noted China was also a strong candidate.

Vega’s win keeps the title in the hands of another Latina — reigning Miss Universe Gabriela Isler is from Venezuela. Beauty pageants are big business in Latin America, where girls are groomed for the contests from a young age and where Vega said women find “a lot of pride” in representing their country.

Crowd favorite Miss Venezuela Migbelis Lynette Castellanos was cut after the top ten. She had tremendous support and pressure locally and back home. The Miami suburb of Doral, which was host to the women during their stay, is also known as “Doralzuela” for its many Venezuelan residents.Pageants and performance run in Vega’s family. Her grandmother, Elvira Castillo, was Miss Atlántico 1953 (Colombia) and her grandfather is legendary tenor Gastón Vega.But the contests leading up to Miss Universe were a first for Vega, who is one of eight children. She also said they would be her last, as she is eager to return to her business studies, saying: “It gives me independence. I want to have my own company.”

After Sanchez, the 24-year-old Miss USA from Las Vegas, Nevada, the second runner-up was Miss Ukraine Diana Harkusha. Miss Jamaica Kaci Fennell and Miss Netherlands Yasmin Verheijen were also among the top five, emerging from the field of 88 contestants.

Fennell stood out with her short, spiky haircut and feisty personality.

“I don’t have long tresses like everyone else. I’m just representing myself, and that’s what beauty pageants are all about,” said Fennell, who wore a long, red beaded evening gown. “You don’t have to look a certain way … and I feel like I represent that.”

As Miss Universe, Vega will receive an undisclosed salary, a luxury apartment in New York, a wardrobe and oodles of beauty products, and a one-year scholarship from the New York Film Academy.

“It will be a dream come true to represent the woman of today,” Vega said earlier in the week. “A woman that not only cares about being beautiful and being glamorous, but also cares about being a professional, intelligent, hard-working person.”

It seems that the entire world revolves around Asians nowadays. Japanese...
Read more

What girl would not want her love story to develop as...
Read more

QCOSTARICA - People who knew him remember him as...
Politics

QCOSTARICA - By a majority voter, on Thursday legislators...