Can India compete with China in Latin America? Not likely

Starting at the beginning of this decade, academics and policymakers started to point to India as a potential source of investment, trade, and economic diversification for Latin America.

Lately, however, non-partial observers of the Americas have largely stopped writing about the potential for ramped up Indian involvement in the region. And while it’s true that India under the leadership of Prime Minister Narendra Modi has been eager to start projecting its power around the world, trade between Latin America and India has been steadily declining.

According to data from the Indian Department of Commerce, after consistently growing throughout the 21st century to a peak of more than $41 billion in 2012-2013 (April-March), trade between Latin America and India has been on the decline ever since. (It fell for the fourth straight year to a little over $24.5 billion in 2016-2017 before a slight rebound in 2017-2018.)

As the graphs below show, while India’s trade has grown with many countries in the region in the last ten years, it’s been far outpaced by China. 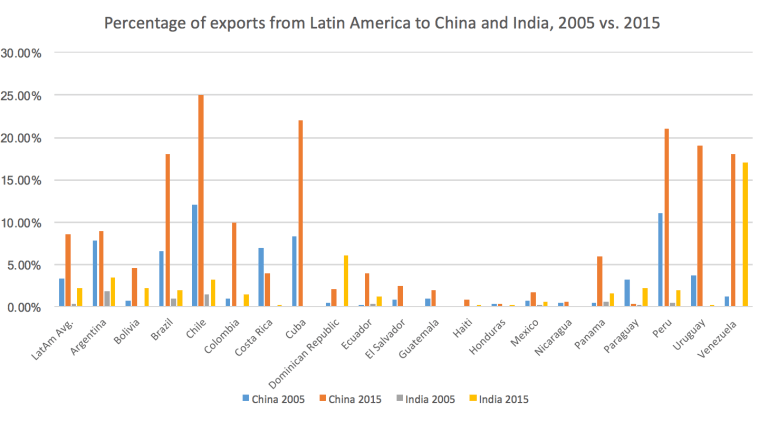 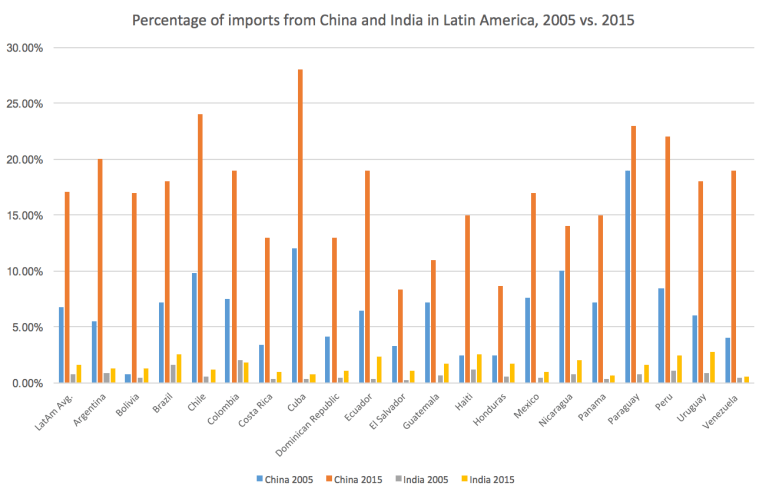 Advocates for a Latin American embrace of Indian trade and investment tend to make the argument that India is a more responsible economic partner that has more to offer than resource extraction. But Indian imports from their largest trading partners in Latin America are even less diverse than those of their Chinese counterparts.

The one country where India has come to rival China as a destination for exports is Venezuela (China accounts for 18% of all Venezuelan exports; India accounts for 17% of all exports). And while both countries’ imports from Venezuela are understandably dominated by petroleum products, India imports more raw materials than does China from all of its largest trading partners in the region.

While Chinese imports from these countries are also dominated by raw materials, it’s to a much lesser degree than Indian imports. For example, Brazil exports finished products including ships, airplanes, and helicopters to China that are worth more than the entirety of Indian imports from Brazil. The pattern is repeated in Mexico, Argentina, Chile, and Peru. (You can explore those trade relationships more in depth using MIT’s excellent Observatory of Economic Complexity).

Cross-country investment is another important measure of the strength of an economic relationship. Here too, India is still dwarfed by China. According to data from the Confederation of Indian Industry, cross-country investments between India and Latin America total roughly $23 billion. For comparison, China invested more than $60 billion in Brazil alone between 2003 and 2016.

India is, and will continue to be, an important economic partner for countries in Latin America, especially as an alternative export market for raw materials. But eight years after the IDB placed the potential for collaboration on par with the Sino-Latin America economic relationship, it’s clear that the hype that existed over the relationship at the start of the decade has died down for good reason.

While the countries of Latin America and the Caribbean should no doubt continue to diversify their markets, reduce dependence on China, and seek alternative sources of investment, it’s unlikely that India will be able to serve as an alternative to China, either as a trade partner or a source of investment, any time soon.

QCOSTARICA - The Government of Carlos Alvarado confirmed on Friday that...
Read more

Slots are the most popular category in any casino. Gambling websites feature hundreds of these games, simplistic and elaborate. Reel symbols range from cherries...
Vaccine

QCOSTARICA - A new batch with 124,020 doses of the covid-19 vaccine landed Tuesday night, as part of the weekly deliveries from Pfizer. With this...
News

QCOSTARICA - The Covid-19 infection rate in Costa Rica dropped, but not enough to reduce the rate of infection. While the indicator stands at 1.32,...
Mexico

Q24N - Mexico City will reduce social distancing measures as of next week in the face of a continuous decline in the spread of...
News

QCOSTARICA - As of this week, tax exemptions on-line purchases of less than US$500 have been eliminated, except for goods without a commercial value...