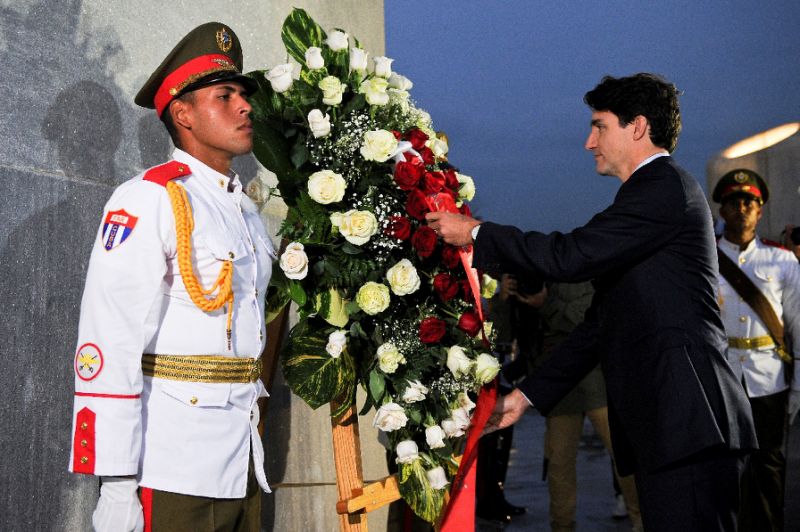 After arriving at Havana airport, Trudeau headed straight to the city’s iconic Revolution Square and laid a wreath, an AFP photographer saw.

The two-day visit is the first stop on a tour that will also take Trudeau to Argentina and to Peru for the APEC Asia-Pacific trade summit.

According to Trudeau’s office, the goal is to “renew and strengthen” the bilateral relationship.

Trump, who won the US presidential election a week ago, has sent mixed messages about the thaw in US-Cuba relations which was started two years ago by current US President Barack Obama.

Trump gave it a lukewarm welcome at first, before vowing to reverse the new policies unless Raul Castro agrees to democratic reforms and other demands.

Because Obama used executive authority to enact the rapprochement, Trump could change course just as easily to reinstate financial, trade and travel restrictions.

While observers note that Cuba will probably not be a priority for Trump, it remains unclear how he would view a Trudeau-Castro photo opportunity.

The visit is primarily “symbolic,” John Kirk, a politics professor and Cuba expert at Dalhousie University in Halifax, told AFP.

Canada maintained diplomatic ties with Havana after the revolution “despite significant pressure from Washington” over the years, Kirk said.

Ottawa also remained steadfastly opposed to the American trade embargo on Cuba, which has not been revoked by Congress.

Officially, no meeting is planned with Fidel Castro, but “there’s a chance” they will see each other, Cuba’s ambassador to Canada, Julio Garmendia Pena, told Canadian media. The visit is the first by a Canadian leader to Cuba since Jean Chretien in 1998.

Over the past decade, bilateral ties reached a historic low with former Conservative prime minister Stephen Harper often siding with Washington in seeking to isolate Cuba on the international scene.

Yet it was also Harper who hosted secret talks between US and Cuban officials in 2014 leading to the rapprochement.

Today, Cuba continues to welcome a huge influx of Canadian tourists each year — 1.3 million or nearly 40 per cent of all tourist visitors.

Bilateral trade remains modest at less than US$1 billion annually.

Despite their warm diplomatic ties, many Canadian companies do not invest in Cuba over fear they will be blocked from the US market.

- Advertisement -
Paying the bills
Previous articleThat Was Quick. Back to Jail. ‘Cuba Dave’ Found Guilty!
Next articleCosta Rica From Above (Part II)